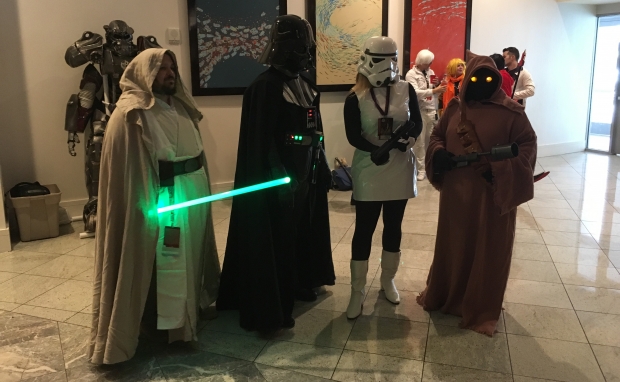 I survived my first full day at Dragon Con! Although I stumbled back to the train station tonight in a bit of a daze (Dragon Con involves a LOT of walking, and you WILL get tired), I had an awesome day and can’t wait to go back tomorrow. It’s so cool to see a bunch of geeks who are passionate about their fandoms all hanging out in the same place.

I started off the day with a panel featuring the ESO Network’s own Mike Faber, talking about fandom and how it impacts people’s lives. It’s amazing to see how much geek culture has exploded in popularity over the past few years, and it’s great that more fans are discovering these franchises all the time. I also appreciated that the panel touched on toxicity in fandom; this topic has made headlines recently, and while the vast majority of fans are good people, it is important to talk about some of the negativity and bullying that occurs online. It’s good for fans to have conversations about how we can keep geekdom safe and welcoming for all.

Next, I decided to dive into a bit of controversy with “The LAST Last Jedi Debate,” moderated by Chris Gore of Film Threat. 😉 While “The Last Jedi” has inspired a lot of (sometimes heated) discussions within the Star Wars fandom, I was a big fan of the movie (but you probably already knew that!), and I was curious to see how the debate would go. It turned out to be a fun, very civil discussion, and I was really excited to see Bryan Young, who is the host of one of my favorite Star Wars podcasts, “Full of Sith.” I love Bryan’s passion and enthusiasm for Star Wars.

Of course, I had to check out some of the vendor, author, and artist tables as well, so if you’re at Dragon Con, definitely make sure you stop by this area! I always love seeing people share the things they’ve created. And, unsurprisingly, I had to pick up some Star Wars art (I can’t go to a con without getting a new piece of Star Wars art, of course!). 😉

In the afternoon, I was able to hear a panel featuring several cast members from the DC Comics shows on the CW, a.k.a. “the Arrowverse.” John Noble, John Barrowman, and Victor Garber were a lot of fun to listen to, and they seemed to really enjoy talking about their shows and interacting with the fans. Sometimes you wonder how actors really feel about the roles they play, but all three of them really seemed to appreciate the chance to work on these TV shows and would jump at the chance to do it again. It was also cool to hear John Noble talk about getting more into science fiction after seeing the passion fans display at cons such as this one.

Finally, I got to sit in on a panel of Star Wars authors, featuring ones who wrote for the now retired Expanded Universe and ones who write for the new canon. As someone who enjoys both the old Expanded Universe and the new movies/novels, I liked seeing both types of stories represented. I also really appreciated Timothy Zahn’s comments in response to a question about the Expanded Universe being made non-canon by Disney. He said that it would have been too complicated to make new movies and keep all the previous written material; at the same time, those “legends” stories are still out there and are still fun to read. They’re not going away, and there’s plenty of new material to enjoy as well.

I didn’t end up making it to all the panels that were on my schedule for the day, but that’s okay. I spent quite a bit of time just walking around and looking at all the cosplayers and hanging out with the crew from ESO. Hopefully there will be lots of fun adventures tomorrow!