Home TV review: ‘The Clone Wars’ finale on Disney+ a great end to the series

TV review: ‘The Clone Wars’ finale on Disney+ a great end to the series

Posted 3 months ago by Ashley Pauls 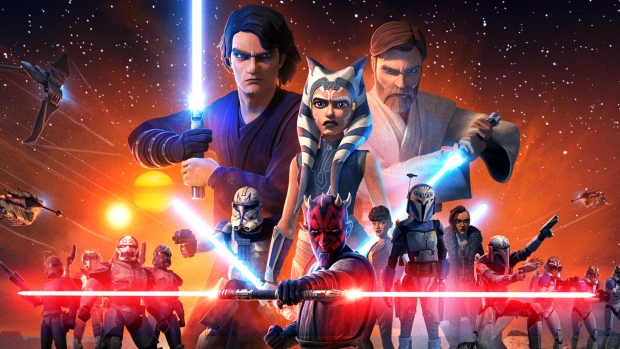 Even though the Star Wars prequels land at the bottom of my personal Star Wars film ranking, the computer animated Clone Wars series (which started airing in 2008) is actually one of my very favorite things in the Star Wars franchise.

Fans have been intrigued by the prospect of the mysterious “clone wars” ever since they were briefly referenced in “A New Hope.” The prequels actually don’t cover as much of the Clone Wars as one might think; we see their beginning in “Episode II: Attack of the Clones,” and then we see the clones turn on the Jedi in “Episode III: Revenge of the Sith.”

Thankfully, “The Clone Wars” series fills in the gap between Ep. II and Ep. III with some wonderfully rich storytelling and character development. We actually get to see more of Anakin and Obi-Wan’s friendship (and it feels more genuine than it does in the films), and we get to know the clone soldiers as individuals, with their own personalities, hopes, fears and dreams.

I’ve heard some people say that it takes “The Clone Wars” a while to get really good, but I actually loved it from the start. I was in college at the time it started airing, and it was so exciting to see brand-new Star Wars.

The show ended prematurely during the time Lucasfilm transitioned to a Disney property. We did get a shortened season 6 on Netflix, called “The Lost Missions,” but the series always felt somewhat unfinished because it didn’t fully address the events of “Revenge of the Sith,” where the Clone Wars abruptly conclude as part of the rise of Darth Sidious (a.k.a. Emperor Palpatine).

Fans never stopped loving the show, and the series finally returned for one final season on Disney+, this time with a proper ending.

The final season of “The Clone Wars” on Disney+ is divided into three different arcs. The first follows the “Bad Batch,” a.k.a. a group of mutated clone commandos who play by their own rules.

I personally really enjoyed the “Bad Batch” episodes, since I’ve always enjoyed clone-focused arcs. Captain Rex is one of my top favorite Star Wars characters, actually. “The Clone Wars” does such a good job portraying the clones as people, rather than mindless soldiers. Watching the show makes me even more uncomfortable with the Jedi’s questionable ethical decision to use a clone army of people who are bred to fight, and aren’t given a chance to choose their own future.

The Bad Batch themselves are a really fun crew of characters, and I especially enjoyed the clone Wrecker, who reminds me of my DnD character whose favorite things are punching and smashing.

The next arc follows Ahsoka Tano after she leaves the Jedi Order and joins the Martez sisters for a job of dubious legality (a.k.a. spice running).

The interesting thing about Ahsoka is that at first, I wasn’t sure I was a fan of her character. In the early seasons of the series, she’s a precocious, know-it-all teenager who tests the patience of her master, Anakin Skywalker.

However, I eventually came to see that Ahsoka’s initial immaturity was an important part of her character arc. During her time training as a Padawan, Ahsoka grows into a wise, skilled warrior. One of the most gut-wrenching scenes in this entire series is when she tells Anakin she’s walking away from the Jedi Order, after learning that they’ve betrayed her.

I was excited for some Ahsoka-centered episodes, but I have to say the middle section is actually the weakest part of the final season, at least for me. Ahsoka’s adventures with the Martez sisters unfortunately feel more like a side quest, and these episodes never fully drew my attention. 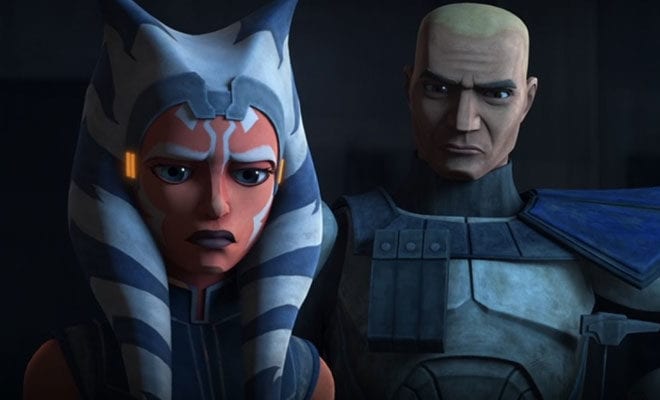 Thankfully, the final four episodes are just as amazing and epic as I’d been hoping. They cover the “Siege of Mandalore,” where Darth Maul leads a Mandalorian rebellion. Technically yes, Darth Maul surviving the events of “The Phantom Menace” strains believability, but I give this plot twist a pass since Maul is used so well as a character in “The Clone Wars” and later on in “Rebels.”

These final episodes are appropriately solemn and full of dread. None of the characters know that Order 66 is looming on the horizon, but the audience does. And we know how powerless the Jedi will be to stop their own fall.

I don’t want to say too much about this final arc, in case you haven’t seen it yet, but it ranks among the best storylines in “The Clone Wars” series. Maul and Ahsoka have an encounter reminiscent of Rey and Kylo Ren’s encounter in “The Last Jedi,” and their lightsaber fight is truly breathtaking.

Even though you can probably guess what happens to characters like Ahsoka and Captain Rex if you’ve seen the show “Rebels,” the Siege of Mandalore storyline is incredibly suspenseful, and watching Ahsoka fight the clones that once fought alongside her is heartbreaking.

The final shots of this show are a true gut-punch, and I was definitely getting more than a little misty-eyed. The finale to this series was certainly worth waiting for.