Posted 7 months ago by Ashley Pauls 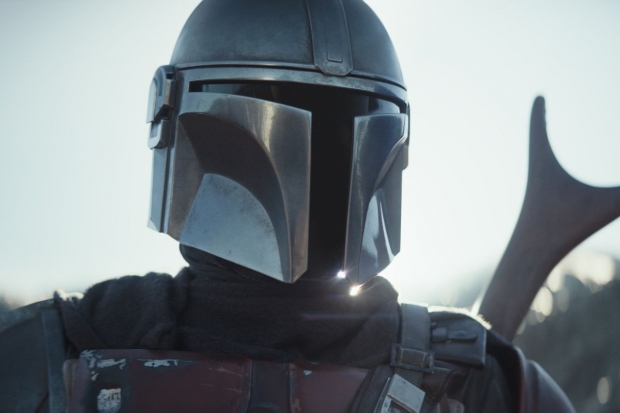 Normally I’m not very happy when my alarm goes off before 6 a.m. But when there’s Star Wars involved…

I definitely could have waited until after work to watch the brand-new Star Wars series “The Mandalorian” on Disney’s just-launched streaming service, Disney+. However, after months of hype and excitement, there was no way I was waiting until tonight to watch this.

I set my alarm for 5:45 a.m. and stumbled out of bed while it was still dark this morning, making my way down to the basement to install the Disney+ app on our TV (the cat was thrilled that someone was awake extra early to give her attention).

There was a brief moment of panic, as the app was a bit sluggish and took a while to load. But thankfully the screen eventually popped up, and “The Mandalorian” was available to watch!

I definitely want to watch the episode again, either tonight or tomorrow, because I was still pretty groggy as I was watching it this morning. I also had the volume turned down lower than normal to avoid waking my husband up (he doesn’t have quite the same passion for Star Wars that I do, and probably wouldn’t have been super happy to be awakened by the sounds of shouting and explosions from the basement).

I’m going to keep this review as spoiler-free as I can, because I know that many have reported difficulties logging in to Disney+ today, due to the high demand. But if you’re wondering whether it’s worth signing up for Disney+ to watch “The Mandalorian,” I’d say it is.

Right off the bat, “The Mandalorian” feels like a Western set in the Star Wars universe, which is exactly the vibe I was hoping it would go for. Pedro Pascal’s title character (who as of yet doesn’t have an actual name) is a lone wolf, a gunfighter and bounty hunter who would be very comfortable in a Clint Eastwood movie.

Star Wars fans have been fascinated by Mandalorians ever since Boba Fett in the original trilogy, and while I’m excited that the new show is keeping the main character very mysterious for now, I do hope we get to learn more about the man behind the mask. In the first episodes, you do catch some brief flashes of his backstory, which I’m sure the show will dive into more deeply later on.

The special effects are very good, I’d say Game of Thrones level. They’re just *slightly* below what we see in the main Star Wars episodes, but this is still a very slick TV show. The plot is somewhat light in the first episode, but that’s okay. It does a great job setting up the tone/style this show will have, and I’m definitely invested and wanting to see more.

We see some solid action sequences, my favorite being a shootout towards the end of the episode. I’m also intrigued by the show’s post-“Return of the Jedi” setting, and I’m curious to see if this show will address how the First Order rises from the ashes of the Empire.

Going forward, I hope the show will continue to lean in to that Western vibe, and that it will also flesh out the characters a little more. But, I definitely like what I’m seeing so far! My gut feeling is that the show is just going to keep getting better and better from here.