Posted 1 week ago by Ashley Pauls 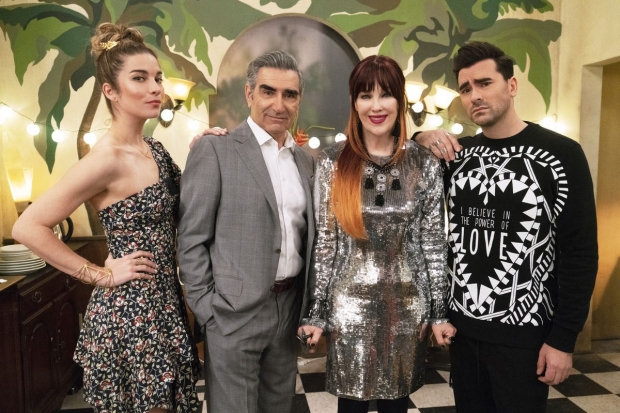 How much do I love the show “Schitt’s Creek”?

However, I’ve been binge-watching the Canadian sitcom “Schitt’s Creek” during the COVID-19 quarantine, and when I realized the final series of the show wasn’t available on Netflix yet, well, that just wouldn’t do. I spent $25 (and yes, it was a little painful for me) to stream the last season on Amazon, and you know what? It was worth every penny.

A friend recommended “Schitt’s Creek” to me a while ago, and I decided to give it a try because it reminded me of the premise for “Arrested Development,” one of my all-time favorite TV shows. “Schitt’s Creek” is about a very wealthy, very privileged (and also very clueless) family — the Roses — who abruptly lose everything and have to move to a small town called (you guessed it) “Schitt’s Creek,” which they’d previously purchased as a joke.

Naturally, the Roses aren’t very thrilled with their new lifestyle, especially since it involves living in a rundown motel and interacting with some of the town’s eccentric residents, including the mayor, Roland Schitt (yep, that’s his real name).

However, throughout the course of the show’s six seasons, the town actually begins to have a positive impact on the Roses. As they build a new life for themselves and form friendships, they turn into better, more compassionate people than when they first arrived.

I don’t think I’ve ever watched a show quite like “Schitt’s Creek,” which manages to strike a perfect balance between laugh-out-loud comedy and heartfelt family drama. While I love “Arrested Development,” it sort of declined in quality as time went on. That’s not the case with “Schitt’s Creek” — I fell in love with the show in season 1, and it keeps on being great. The finale is bittersweet and perfectly satisfying.

There are so many great characters in this show, but my favorites are probably the mom, Moira Rose, and the son, David Rose. Moira is an actress whose star has faded but who still dresses with over-the-top Hollywood glamour, and David is delightfully sarcastic. These two characters play so well off each other.

It would have been easy to let “Schitt’s Creek” keep mercilessly lampooning the Roses, but I like that the family is allowed to go through meaningful character arcs and come to appreciate small-town life. Although the Roses have their quirks, deep down they really are good people. Losing their wealth helps them to learn more about what really matters in life: family and friendship.

At least for me, “Schitt’s Creek” felt like the perfect series to watch during a pandemic. Without getting too personal here, this quarantine has been a time of struggle for me. I’ve had trouble focusing on hobbies that I love, like writing and watching movies. The whole experience has been really wearing on me, especially since there’s not a concrete end date in sight.

However, for whatever reason “Schitt’s Creek” really clicked for me in a way that other stories just haven’t during this time. I’m so grateful for the smiles (and even the tears!) this show brought me along the way, distracting me from my anxiety and the uncertain future we’re facing.

This show is always going to have a unique place in my heart because I discovered it during COVID-19; I’m sure I would have enjoyed it even if I’d watched it at a different time, but it seems extra special because for a short time, during those 20-minute episodes, I felt normal again.

If you’re looking for a show to watch this summer that will lift your spirits, I highly recommend “Schitt’s Creek.”