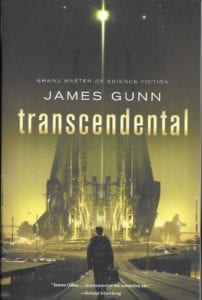 When one titles a book “Transcendental,” it’s probably a good idea to start our review with a clear definition of that word. Our trusty old Webster list it as an adjective; 1) or relating to transcendentalism. (The philosophical belief that knowledge of reality comes from intuition rather than from objective experience.) 2) rising above common thoughts or ideas; mystical.

Confused yet? Maybe looking at the root word transcend can help clarify things a bit more. It is defined as 1) to pass beyond (a human limit) 2) to exist above and independent of (material experience or the universe) and 3) to surpass.

Set in the far-far future, mankind has encountered many different alien races representing the spectrum of our natural universe; animal beings that look like elephants; flower beings that stand on tall stalks and whose roots are mobile. There is even a machine race. Then the various empires fought each other in decades old wars until reason and sanity won out and peace was established. Still, the quest for knowledge is so ingrained in the nature of all sentient beings, ultimately that seeking creates a quasi religion surrounding a so-called Transcendental Machine.

And therein lays the crux of James Gunn’s fantastic plot in which a group of aliens from the furthest reaches of the known galaxy come together to journey beyond known space in the hopes of finding this wondrous Transcendental Machine. Riley, a cynical ex-mercenary is kidnapped by unknown parties and has an organic computer implanted in his brain. If he refuses to obey this “pedia” it will kill him. He is told to sign aboard the spaceship Geoffrey about to undertake that trip. On the ship are representatives of the various galactic races each hoping to experience instant evolution to a higher state of being via the Transcendental Machine.

The “pedia” also informs him that one of the passengers may be the rumored Prophet, the only being to ever find the machine and be transformed by it. It is believed the Prophet is traveling with the expedition to determine which of the travelers is worthy of undergoing the change. No sooner does the group assemble at the space ladder taking them to the Geoffrey then an attempt is made to sabotage their launch. Then, shortly after passing through the first nexus jump point, a passenger is found murdered in Riley’s cabin.

Why are we here? What is our true purpose? Is there a higher evolutionary step in our future? All these philosophical questions surround a standard suspense thriller in this truly unique narrative. Gunn’s depiction of the various races is imaginative and compelling. One of the classic faults of most science fiction has always been, according to critics, our inability to accurately understand something alien. We can only ever interpret this world via our own human limitations. Whereas Gunn’s tale argues quite powerfully that all species born of the same physics will ultimately share the same perspective inherent in the same nature, be rocks, vegetables, or flesh. One universe equals one truth. In “Transcendental,” Gunn invites us on a journey to discover that truth, no matter how beautiful or frightening.