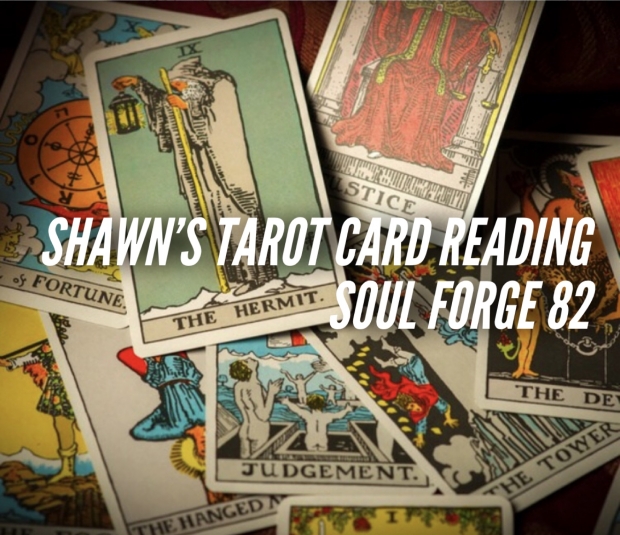 Happy New Year Soul Forgers, and welcome to the first episode of the year! Presented for your listening pleasure, is audio of Shawn’s first ever Tarot card reading.

Is there a secret source of knowledge hidden by the universe? Can Tarot cards, psychics or tea leave readings uncover this mysterious wisdom? Can arcana be real or is this all just made up mumbo jumbo? We may never know for sure, but we can have fun speculating about it.

Join Shawn as he gets his first Tarot card reading. What secrets will be revealed? Without knowing how real this type of magic is, there’s no way to ascertain if what Shawn learns can be applied to the real world of career and finances. However, the reading was a lot of fun and some exciting revelations came about. So sit back, put your feet up, and enter the mystical realm of prophecy and predictions.

The tarot (/ˈtæroʊ/; first known as trionfi and later as tarocchi, tarock and tarot) is a pack of playing cards, used from the mid-15th century in various parts of Europe to play games such as Italian tarocchini, French tarot and Austrian Königrufen. Many of these tarot card games are still played today. In the late 18th century, some Tarot packs began to be used in parallel for divination in the form of tarotology and cartomancy and, later, specialist packs were developed for such occult purposes.

Like common playing cards, the tarot has four suits (which vary by region: French suits in Northern Europe, Latin suits in Southern Europe, and German suits in Central Europe). Each suit has 14 cards, ten pip cards numbering from one (or Ace) to ten and four face cards (King, Queen, Knight, and Jack/Knave). In addition, the tarot has a separate 21-card trump suit and a single card known as the Fool. Depending on the game, the Fool may act as the top trump or may be played to avoid following suit. These tarot cards, without occult symbology, are still used throughout much of Europe to play card games.

In English-speaking countries, where these games are not played, tarot cards are used primarily for divinatory purposes, usually using specially designed packs. The cards are traced by some occult writers to ancient Egypt or the Kabbalah but there is no documented evidence of such origins or of the usage of tarot for divination before the 18th century.