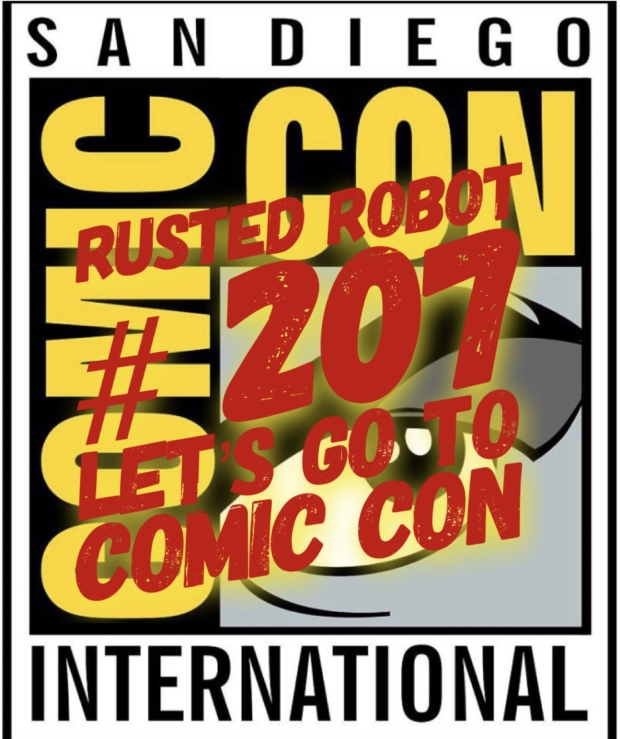 San Diego Comic Con 2018 is here! We weren’t able to make the trip to be there in person, but We’ve got the news from Hall H! This episode of The Rusted Robot Podcast has trailer reviews, discussions because of those trailers, and rampant speculation and digressions!

Doctor Who’s much anticipated eleventh season is coming this fall. We’ve got the trailer. We talk about our favourite doctors, and we can’t remember the name of the actress who played Amy Pond.

Star Trek Discovery’s panel released a trailer for the second season. It looks amazing. We see lots of Captain Pike, but no Spock. What are those red dots? Is Spock really connected to them? What about the spore drive? We’ve got 8 highlights for the upcoming season. We may finally get our connection to canon.

The Toys That Made Us – season 3 episodes of the hit Netflix show have been revealed, and we are excited about the toys we are going to learn more about.

Glass – the trailer for the sequel to Unbreakable and Split is here. The film hits theatres in January 2019.

Godzilla: King of the Monsters. Just a teaser was released when we recorded the episode, but the full trailer looks amazing.

Star Wars: The Clone Wars is getting an unexpected final season. What’s all that about? Kevin Smith tells us a bit more about it.

Titans – the Teen Titans are getting a live action television show. The trailer is full of swears so we don’t play it, but we do discuss it. Josh tells us why it is bad news and everything that is wrong with what we have seen so far.

Patient Zero – a trailer for another end-times zombie type of film.

Steel City NerdCon, my home town of Sault Ste. Marie is getting its first geek convention, and I will be there!

This week’s promo: The 42 Cast