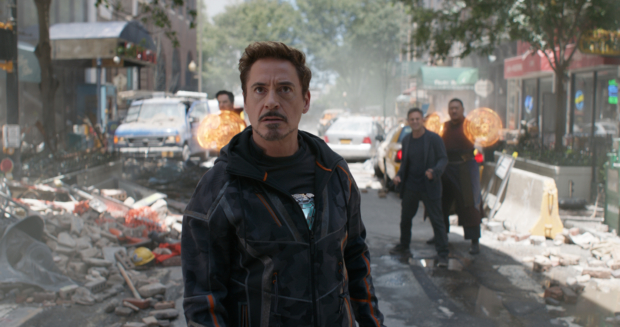 When I watch a geek movie on opening night, many times the audience will clap and cheer after the film is over, at least in the theaters near where I live. However, there was no applause after “Avengers: Infinity War” — simply because everyone was too stunned by what they’d just watched.

The word “epic” is thrown around a lot as a buzzword, but its use is absolutely appropriate here. “Avengers: Infinity War” is a genuinely epic event film, the stunning culmination of a 10-year build-up that is unlike anything we’ve seen on screen before. Believe the hype — “Infinity War” was worth the wait.

Like “Star Wars: The Last Jedi,” it’s really hard to talk about “Infinity War” without diving into heavy spoilers, but I’m going to try my best. Although I’ll get into spoilers later in this review, that section will be clearly marked. Absolutely do not let ANYONE spoil this movie for you or ruin any of the surprises!

After years of hints and foreshadowing, the ultimate Marvel villain is here — Thanos — and he’s just as powerful and terrifying as everyone feared. Our heroes are dealing with a whole different level of villain here, and the film lets you know right away that it isn’t messing around, with some shocking twists in just the first few minutes of the movie. The stakes are higher, and for the first time, our heroes might not be up to the challenge. It was fascinating and disturbing to see powerful heroes like Doctor Strange and Thor actually struggling to fight Thanos.

One of the things I was most worried about with “Infinity War” was how well the film would come together with so many characters — all the Avengers, the Guardians, etc. Would the final product end up being a choppy, overly-complicated mess? However, the Russo Brothers do a fantastic job juggling all the characters and details. The story never gets bogged down, and every character has a moment to shine. I particularly enjoyed the unexpected team-up with Thor, Rocket, and Groot, and the ego-driven, quip-fueled showdowns between Iron Man, Doctor Strange, and Star-Lord.

Of course, there’s plenty of trademark Marvel humor here, but the tone is surprisingly darker, particularly in the final act. There were just a handful of moments where I thought a joke undercut what should have been a completely serious moment, but overall the humor works well to balance out the heavier spots. There are some truly shocking — and heartbreaking — moments in this film. And as for the ending…well, there’s a reason everyone in the theater seemed so stunned as the credits started rolling. Kudos to Disney for allowing the Russo Brothers to end the film on a very somber note.

Well, I feel I’ve covered about all I can without diving into spoilers, so fair warning, if you haven’t seen “Infinity War” yet, stop reading now…

I feel like what separates good movies from great ones isn’t the action set pieces, or the big, shocking reveals — it’s the little moments. Snatches of dialogues between characters, small details that add up to equal something special. And “Infinity War” has a lot of these moments. There’s the conversation Rocket and Thor have about loss; Scarlet Witch and Vision realizing they can’t have a normal life together; and Tony still trying to be a father figure to Spider-Man.

There are so many gut-punches in this film. Loki and Vision were two characters I had speculated might die in this movie, but it’s still hard to see them go. And I definitely didn’t see Gamora’s death coming. As sad as these deaths are, they give the film much-needed weight. Thanos is supposed to be THE BIG BAD of the MCU, and if he didn’t kill any major characters, he would have felt underpowered.

Which is another reason why I really appreciated the film’s darker ending. I figured Thanos wouldn’t die in this movie, but I wasn’t sure he’d be able to collect all the Infinity Stones and actually get to snap his fingers and wipe out half of the universe. You can tell that moment really shocked audiences — it’s one of the loudest collective gasps I’ve ever heard in a theater. And while I’m almost 100 percent positive the characters who faded away at the end won’t stay dead, it was still an emotionally impactful moment. Tony holding Peter Parker as he fades away really got to me (man, that “I don’t want to go” hit me almost as hard as David Tennant’s “I don’t want to go” in his final minutes as the Tenth Doctor).

I have no idea how the next Avengers film will wrap things up, and that’s incredibly exciting to me. The whole time I was in the theater during “Infinity War,” I had the feeling that I was watching something truly special. I feel like I need to see it again to decide where to place it in my ranking of MCU films, but it’s most likely going to be in my top 5 (at least). The film delivered everything I was hoping for, as well as some major surprises.

The only possible drawback of the film is that it’s definitely not a stand-alone story (if you haven’t seen all the individual Marvel movies, some parts probably won’t make sense). However, for me it was a thrilling and emotionally satisfying conclusion to what we’ve seen in the MCU so far. I’m already hyped for the still-untitled “Avengers 4” next year — and “Captain Marvel”!