Posted 11 months ago by Ashley Pauls 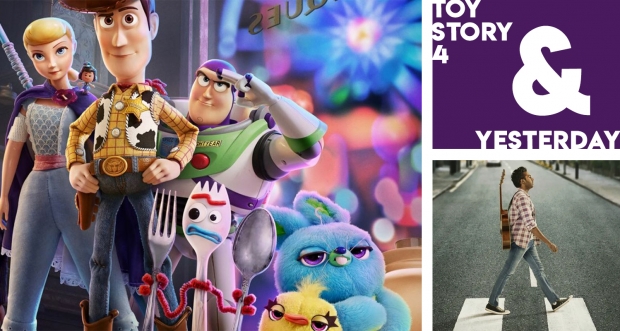 How do you let go of a dream that you’ve been holding onto for so long that it’s become a part of who you are? Even when that dream has turned into something toxic, you just can’t imagine your life without it.

I really wasn’t expecting to find parallels between the two movies I saw in theaters this weekend: “Yesterday” and “Toy Story 4.” One is about a man who wakes up in a world where only he remembers The Beatles, and the other is a continuation of an animated franchise about toys who come to life.

Both of these movies were entertaining, yet they also turned out to be way more thought-provoking than I had planned on. I wish I could write up full-length reviews on both of these, but alas, it’s summertime and difficult to keep up with all the new movies coming out. Here are my quick thoughts on each, and some of the interesting parallels between them.

I was intrigued by “Yesterday” from the moment I saw the first preview. Jack Malik (Himesh Patel) is a struggling singer-songwriter who is pondering giving up his dream of becoming a famous musician. Then, on the night of a strange power outage that takes place across the world, he gets in an accident.

When he wakes up, he appears to be the only one who remembers who The Beatles are. This presents him with an intriguing ethical conundrum: should he perform The Beatles’ music and market it as if it were his own? Technically he’s not hurting anybody or stealing from anyone in this reality, because The Beatles were never “a thing.” Yet deep down, he knows he’s being dishonest, and untrue to himself.

On a surface level, “Yesterday” is a quirky, entertaining romantic comedy. Overall, I felt like it was lacking the little extra push it needed to go from “good” to truly “great” but I would still definitely recommend it, especially to Beatles fans. It’s always a pleasure to hear these songs again.

I also really loved that they never explained how reality shifted and apparently erased the existence of The Beatles. I think including that would have bogged down the movie and detracted from its quirky charm. I do wish they hadn’t added in additional missing pop culture fixtures (like Coca-Cola and Harry Potter), because that kinda distracted from The Beatles premise.

I also appreciated the movie’s message about recognizing when it’s time to let go of a dream. It’s something we don’t talk a lot about, because we’re used to the message of “follow your dreams and don’t ever give up and you too can succeed!”

The truth is, not everyone is going to be famous. You can work really hard and never get recognized for that work. It’s terrifying to look a dream that is so precious to you and think about giving it up, but sometimes that is the healthiest thing you can do.

Jack eventually lets go of his dream of being a superstar (and confesses about stealing The Beatles’ music). Then he goes on to find incredible joy and meaning in an ordinary life.

As someone who had big dreams post-college and then my life ended up going a different way, the ending of this movie really resonated with me. Maybe I’ll never be famous, but I still find joy and fulfillment in being creative.

I missed seeing “Toy Story 4” on opening weekend due to traveling for work, and I actually considered skipping it. “Toy Story 3” felt like such a perfect ending to the franchise, and the trailers for “Toy Story 4” didn’t necessarily grab me.

However, it was actually my husband who announced that he wanted to see it after hearing some glowing reviews, and I’m so glad he did.

“Toy Story 4” is so much more than a mere cash grab or tired, rehashed sequel. It’s a great film in its own right, and it stands with “Toy Story 3” as the best in the franchise, at least in my opinion. It’s been a while since I laughed so hard I cried in a theater, but “Toy Story 4” delivered (“plush rush” is all I’ll say and leave it at that, for those who haven’t seen the movie yet).

The standouts of the movie are actually some of the new characters: Forky (voiced by “Arrested Development’s” Tony Hale) and carnival plushes Bunny and Ducky (voiced by comedy duo Key and Peele). I never thought I would laugh so hard at the antics of a plastic spork, but Forky and his obsession with trash are hilarious. Bunny and Ducky also generated lots of laughter during the showing I went to, including the moment referenced in the previous paragraph.

Yet what impressed me most about this movie is that Pixar was able to present a new story with a meaningful message that doesn’t detract from previous films or borrow too heavily from them, either.

The heart of this movie is Woody’s personal journey to adapt to a new life after Andy has moved on. He isn’t connecting with his new kid, Bonnie, as much as he connected to Andy, and it’s hard for him, since so much of his identity is wrapped up in being a child’s beloved toy.

I was actually a little surprised that they ended the movie with Woody going off on his own adventure with Bo Peep, who is a proud “lost toy” without an owner. I’ll admit it, I definitely got a little teary-eyed as Woody watched Buzz, Jessie, and the rest of the gang driving off in Bonnie’s family’s RV after an emotional goodbye.

But I really liked that ending, and it’s the reason why “Yesterday” and “Toy Story 4” play well together. Woody has a hard time letting go but eventually he realizes that he needs to let go of his past dreams and try something new.

There’s grief in letting go of his old life, but also joy in embracing a new adventure. And saying goodbye to your friends doesn’t mean you stop caring about them.