Home John Barrowman: Please beg the BBC to bring Captain Jack back to Who

John Barrowman: Please beg the BBC to bring Captain Jack back to Who

Posted 8 years ago by ESO Network 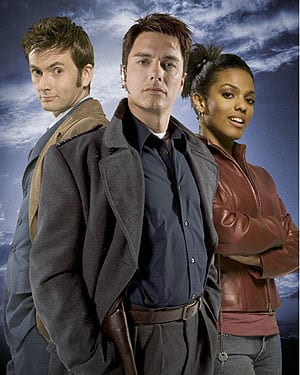 Torchwood’s John Barrowman has always been pretty vocal (hmmm, make that a LOT vocal) about wanting to return to Doctor Who. And he’s at it again … only this time, he’s asking you to write to the BBC to make it happen.

Doctor Who will celebrate its 50th anniversary in November of 2013 (and yesterday was Star Trek’s 45th anniversary—so it’s really a great time to be a geek) and John Barrowman—who’s finishing his latest stint as the beloved Captain Jack Harkness tonight in Torchwood: Miracle Day’s finale—wants to make sure his immortal character will be stepping into the TARDIS alongside the Doctor (Matt Smith) when that happens.

“It’s the 50th anniversary coming up of Doctor Who and Jack is an integral part to this story and, if I’m going to be a little self-absorbed, I would hope he would be involved, it would be a shame if he wasn’t.”

The actor didn’t hide the fact that he’d be more than happy to play Jack again on Doctor Who, but that ultimately, the decision rests with the good old Aunt Beeb (the BBC) itself and the Who writers (as well as with showrunner Steven Moffat):

“I don’t think it’s a question of whether I would like to come back as Captain Jack, I’d be very happy to do that any time. I know the fans would really like that. But it’s a decision left up to the BBC and the drama department.

“So like I’ve said to all the fans, you need to write to them if you want it to happen because I’ve never been asked. I know Russell [T Davies] thinks it might be a nice idea as did [executive producer] Steven Moffat but who knows?”

If Captain Jack makes it to the show’s 50th anniversary, it will be the first time the character will meet Matt Smith’s Eleventh Doctor, having been previously acquainted with Doctors number Nine (Christopher Eccleston) and Ten (David Tennant).

So if you guys really want to have Captain Jack back for Doctor Who’s 50th anniversary (and perhaps even before that)—write!