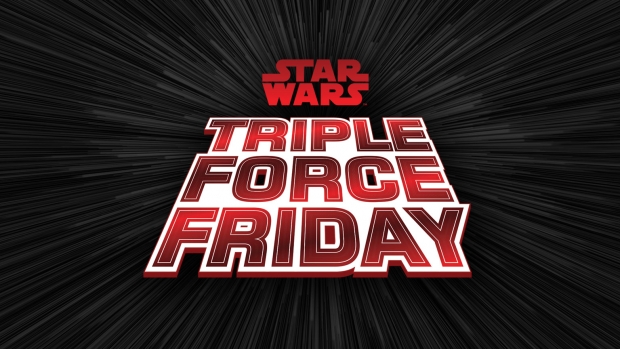 Ever since I walked out of the theater almost two years ago, I have thought about “The Last Jedi” every single day. I haven’t decided whether that’s charmingly geeky, or a sign that I need an intervention.

Regardless, I’ve really fallen in love with Disney/Lucasfilm’s Star Wars sequel trilogy and all the new characters. I’ve been hyped for Episode IX ever since I saw the first trailer, and so of course I couldn’t resist heading to the store to check out some of the new merch today on “Triple Force Friday.”

I’m not entirely sure why they decided to call the Episode IX merchandise launch date “Triple Force Friday” (unless it’s because this is the third time they’ve done this; I’m pretty sure they did “Force Friday” launches for both “The Force Awakens” and “The Last Jedi”).

I couldn’t find a midnight release party that was close to me (and I have a hard time staying up till midnight anyway), so I woke up bright and early this morning to head to Target and Walmart to check out the selection.

I thought Target opened at 8 a.m., so I figured getting there at 8:30 would leave me plenty of time. Turns out, I was wrong. The store actually opened at 7 a.m., and by the time I got there a lot of the hot ticket tickets had already sold out.

As you can see in the photo below, a lot of the Hasbro Black Series action figures had been picked over, and they appeared to be all out of Rey and Sith Troopers.

However, I did see one “Supreme Leader Kylo Ren” action figure sitting alone on a shelf, and I was able to grab it. I’ve been wanting to start collecting Black Series Star Wars action figures; I love the detail and the accessories (the Kylo action figure comes with a cool lightsaber, cape, and detachable hood).

Thankfully Target had several Funko Pop figures left, so I got Rey and Kylo Ren. Yes, I technically already have two sets of Rey and Kylo Pop figures (one from “The Force Awakens” and one from “The Last Jedi”), but since I’ve already fallen this far down the rabbit hole I figured I might as well complete the set and get some from “The Rise of Skywalker.”

Finally, I also got a toy Kylo Ren lightsaber. I’ve decided to make a Dark Rey/Kylo Ren mashup costume to wear to Star Wars: Episode IX, and of course I need a lightsaber to go with it. I really wanted one of those more fancy-looking Force FX brand lightsabers, but that was bit beyond my budget, so this $25 one was a lot more doable and should work fine for cosplay purposes.

(Also, I grabbed a basket instead of a cart in order to try to limit the amount of stuff I decided to purchase. I also qualified for a Target rebate gift card, which was fun.)

Target also had this pretty cool display with motion-activated lightsabers. I didn’t linger too long, though, because I wanted to head over to Walmart to see if they had any Black Series action figures left.

Thankfully, I got very lucky at Walmart (which was only about a five minute drive from the Target). Not only did they still have Black Series Sith Trooper action figures, they had one Rey!

I’m pretty sure I was whispering “Yes!” in a very excited voice as I grabbed the last Black Series Rey, and anyone walking by might have thought I was a little crazy. But Walmart was pretty quiet at 9 a.m., and hopefully no one noticed me.

I don’t even know what role the Sith Troopers will play in the movie, but I think their armor design is so cool. I also love that Rey comes with D-O, the new little droid that will appear in the movie.

All in all, Triple Force Friday was a fun experience, even though if I did it again I would have gotten up earlier and waited in line. I was also a little disappointed that I didn’t see any merch for “The Mandalorian,” although maybe that had all sold out by the time I arrived.

Still, I’m thankful that I got all the merchandise I wanted. I’ve also heard reports that they’re holding back some merch for “The Rise of Skywalker” because it’s too spoiler-y, so I’m looking forward to checking that out once the movie releases.