Home ‘Creature’ Breaks Box Office Records, And Not In A Good Way

‘Creature’ Breaks Box Office Records, And Not In A Good Way

Posted 9 years ago by ESO Network 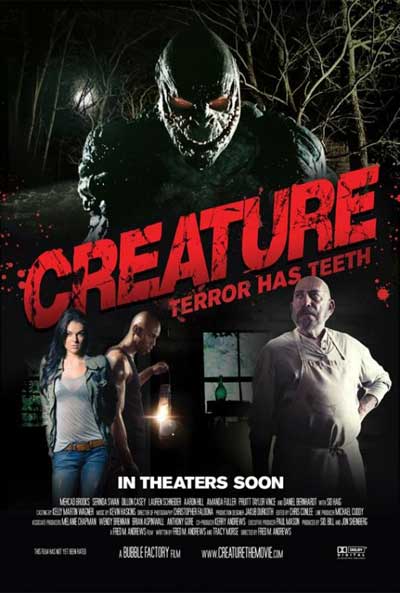 If a movie opens, and nobody is around to see it, does it make any money?

“Creature,” a low-budget horror film from first-time director Fred Andrews, was independently financed and released last weekend nationwide. An average of six people watched each showing across the country, giving the film the fifth lowest opening weekend box office gross on record for a film in nationwide release, with a total of $331,000 in ticket sales. Box Office Mojo noted that it’s the worst opening in box office history for a film that opened in more than 1,500 theaters.

It’s likely you’ve never even heard of “Creature,” and that’s probably because there were no print or television advertisements, and most of the marketing was carried out guerrilla-style, according to the New York Times, with ads on Fandango and horror film site, Bloody Disgusting.

We’re left to wonder: with no star names attached, no discernible marketing budget, and a throwback horror plot, what were the producers really hoping for?

Speaking with the Huffington Post on Monday, Sidney J. Sheinberg, the 76-year-old lead producer on the film, explained that he had every indication that this experiment in distribution would pay off. Advance word on the film from test audiences was positive, and the film’s website had received over a million clicks in the weeks leading up to its release.

“We wanted to find out can you open a picture on a profitable basis, without incurring costs that quite frankly are embarrassing,” he said. “This is a film I wanted to see us make, in the category of something we could afford to do and finance ourselves.”

Sheinberg is widely credited as being responsible for ushering a young Steven Spielberg into the film industry, and he supported countless other classic films during his tenure as president of MCA, Inc. Today, Sheinberg serves as the vice chairman of Human Rights Watch, and co-runs a production company called “The Bubble Factory,” with his sons, Bill and Jonathan. The Bubble Factory was also responsible for such films as “McHale’s Navy,” “The Pest,” and the remake of “Flipper,” among others.

He told the Times last week that the company would release “Creature” independent of any major studio backing, working directly with theater chains like AMC and Regal to distribute the film.

“To market this too seriously,” he told the Times, “would be an act of stupidity I hope I’m not capable of.”

Marketing aside, the critics were almost unanimously unenthused. The film netted an 11% rating on Rotten Tomatoes, with Boxoffice Magazine calling it “as uninspired as its generic title” and Cole Smithey suggesting the film should have certainly gone straight to DVD. However, a couple of critics, Mark Olsen of the Los Angeles Times among them, found the film “delightfully dopey” — a throwback to goofy horror flicks that aren’t made anymore.