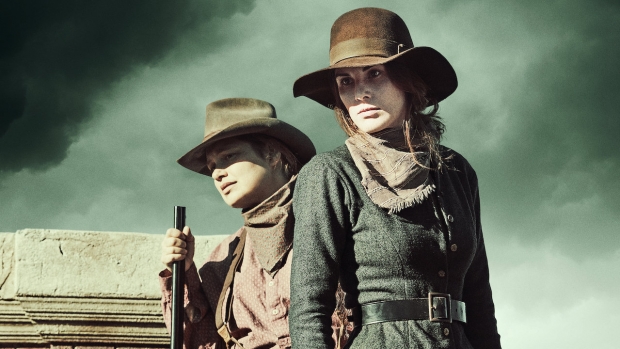 For a number of years, it seemed like television was looked on as a lesser art form than film. But thanks to the rise of prestigious and popular TV dramas like “The Sopranos,” “Game of Thrones,” and many others, we truly are living in a golden age of television storytelling.

Because of technology, some of those shows aren’t even airing on traditional broadcast television anymore; online streaming services like Netflix have produced a number of buzzworthy series, including “Daredevil” and “Stranger Things.” A while back, one of their original miniseries, “Godless,” caught my eye, and I figured this blog series was a perfect excuse to circle back around to that show.

“Godless” is a Western miniseries starring Michelle Dockery, Scoot McNairy, and Jeff Daniels, among others. Michelle Dockery actually plays one of my favorite characters on the British period drama “Downton Abbey,” and I was curious to see her in a completely different type of role.

The setting of “Godless” is a far cry from the posh, refined world of “Downton Abbey.” It’s a show populated by dusty towns and bleak landscapes, where hardship is the norm rather than the exception.

The series follows multiple characters, including widow Alice Fletcher (played by Dockery), who’s known plenty of tragedy and likes to keep to herself; sheriff Bill McNue (Scoot McNairy), who still grieves the loss of his wife and is now losing his sight as well; outlaw/terrorist Frank Griffin (Jeff Daniels), who leaves behind a trail of blood wherever he goes; and former outlaw Roy Goode (Jack O’Connell), whose conscience finally gets the better of him and motivates him to turn against Griffin.

The first episode of “Godless” drops you somewhat abruptly in the middle of the story, so it took me a while to figure out what was going on and to determine how all the characters tied together. But once I did, I was definitely hooked.

I’m sure that if you’ve been following along on this Western blog series, by this point you’re tired of hearing me use the phrase “revisionist Western.” I’ve talked about that subgenre (and how much I love it) quite a bit already, so I won’t go into more depth here. However, “Godless” fits quite comfortably into this subcategory of Westerns, and that’s probably why I really enjoyed it.

I’ve only had a chance to watch the first two episodes so far, but the character I’m most drawn to is Alice. Older Westerns haven’t always done a good job portraying the perspectives of female characters, and women in these Westerns are often sidelined or not included at all. While neither situation is good, I’d almost rather have no female characters than inauthentic ones. In some of the past Westerns I watched, all the female characters were given to do was swoon over the heroic male lead while wearing suspiciously modern makeup. They seemed more like prizes to be won than actual characters.

“Godless” actually has quite a few strongly-written female characters due to the fact the town is mostly populated by women (most of the men were killed in a tragic mining accident). The women have had a chance to fill traditionally male roles, and understandably, some of them are not eager to go back to the status quo of the era.

Alice in particular feels like a real woman who might have lived in the “wild West.” She has a hard life on the frontier, and there’s a weariness in her eyes that speaks to many years of labor and heartache. She has the added challenge of being a single parent in a time period that was difficult for women anyway, and her family receives discrimination due to the fact she is a widow and her late husband was a Paiute.

Older Westerns definitely glossed over the racial issues that took place on the frontier, and while “Godless” has not yet dived too deeply into this topic, I am hoping it will be addressed throughout the series.

Another character I’m really interested in is Roy Goode, and I’m especially curious to see what his future holds. I love fictional stories that deal with the themes of redemption and atonement, which is the path Roy seems to be on now. We can assume that, as a member of Frank Griffin’s gang, Roy has done some really bad things, but is it too late for him to turn around and be a hero?

I’m sad I’ve only been able to watch two episodes so far (it’s been a crazy week!), but it’s one of those shows where I definitely can’t wait to watch the next part. I’m really looking forward to seeing where this show goes and how the characters are developed.