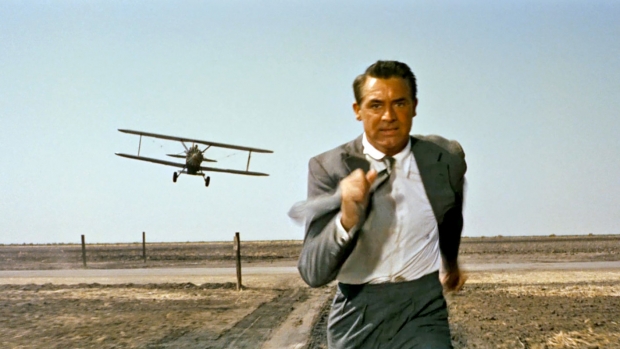 Roger Thornhill is an impeccably dressed but seemingly ordinary advertising executive in late 1950s New York. His life isn’t particularly exciting or adventurous…until he is unexpectedly kidnapped by two very suspicious-looking henchmen in a hotel. They think he’s someone (apparently significant) named “George Kaplan.” He swears he isn’t, but that doesn’t seem to matter. Thornhill is taken to a Long Island estate and questioned, where he becomes still more confused. Despite his protests, no one believes him, and he narrowly escapes an attempt on his life.

What follows is a Bond-esque adventure as Thornhill scrambles to stay ahead of the people who are attempting to kill him AND law enforcement, who are trying to apprehend him after he’s framed for a murder. He may not be a secret agent, but he’ll have to think like one if he’s going to survive.

Alfred Hitchcock is one of Hollywood’s most iconic directors, immortalized as the “Master of Suspense.” To my knowledge, I’d never seen a Hitchcock movie, so I decided that, as a self-described “film buff,” I had probably better fix that. 😉 There are many iconic Hitchcock films to choose from, but when a friend mentioned “North by Northwest” — which stars Cary Grant as an “American James Bond” — I was sold.

Like the previous film I watched for the “Better Late than Never” blog series (“Jaws”), I feel “North by Northwest” has aged very well (with one exception, but I’ll get to that later). It’s a stylish, suspenseful thriller, and thankfully I hadn’t heard much about the plot beforehand, so I was able to enjoy all the twists and turns.

Although Cary Grant is far more charming and stylish than I’ll ever hope to be, 😉 his character was relatable in this movie because he’s not a well-trained secret agent (even though he’s mistaken for one). He’s just a regular guy, and we can empathize with the terror he feels when he realizes just what a nightmare he’s landed in. He goes to the authorities and tries to tell the truth about what happened, but his story sounds so crazy that no one really believes him (even his mother).

However, even though Thornhill is most definitely in over his head, he’s not completely defenseless. It was cool to watch him adapt to his new situation and learn to survive; by the end, I thought he’d actually make a pretty good secret agent! People are capable of more than they sometimes give themselves credit for.

The first half of the film is probably my favorite, because it feels the most mysterious and suspenseful. Thornhill is still trying to figure out what’s going on (and so are we). My favorite sequence was probably the iconic scene with the crop duster; I thought it was very well done. I live in an agriculturally-based state, and so I’ve seen crop dusters before and probably wouldn’t think anything of it if I saw one flying towards me. But then there’s that horrifying moment where both Thornhill and the audience realize just who the crop duster is gunning for. It was also cool to see the action sequence on the face of Mount Rushmore. “North by Northwest” really does feel like an American James Bond film.

So, what makes “North by Northwest” a distinctly Hitchcock film?

Having never seen a Hitchcock film before, I was curious to see whether “North by Northwest” was in line with his typical style. I looked up some classic Hitchcockian elements (thanks, Google!), and it looks like this film has plenty: an innocent person being accused; characters who switch sides or cannot be trusted; average people who end up in bizarre situations; etc. I’m really curious to watch more Hitchcock films to get a better feel for his overall style. Even though “North by Northwest” does feel like an American Bond film, as mentioned before, it very much has its own unique flair.

I also appreciated the cinematography; it felt fairly modern to me, with some interesting camera angles. I also loved the Saul Bass opening credits sequence (which reminded me of when I learned about Saul Bass in my graphic design course in college, and it’s amazing to see his impact on the film industry and advertising in general; he’s responsible for a lot of iconic logos and movie posters).

I ended up having just one complaint about “North by Northwest,” and that’s the way Eva Marie Saint’s character, Eve Kendall, was developed. When she’s first introduced on the train, she immediately caught my attention because she seemed like a really strong, intriguing female character. During her initial interactions with Thornhill, I wondered if she was a double agent or maybe even a villain, and I was really curious to find out more about her.

In the end, however, I was disappointed that the film treated her as more of a stereotypical “damsel in distress” type character who had to be rescued by Thornhill. I would have preferred if she’d been portrayed as a more nuanced femme fatale type character, like Eva Green’s character in the Bond film “Casino Royale” or Qi’ra in “Solo: A Star Wars Story.” The film’s second half strips away too much of Kendall’s agency, and I think the movie’s conclusion would have been more interesting if she and Thornhill had ended up as antagonists. The film’s neatly wrapped-up ending — Thornhill and Kendall get married and live happily ever after! — didn’t quite work for me.

I feel like the movie’s treatment of Eve is part of a larger conversation about roles for women in Hollywood, both past and present. I’m curious to see how others felt about the portrayal of the character.

However, I still feel like “North by Northwest” is a really good film, and I loved watching it and would definitely recommend it. I just think it’s important to have conversations about how films may be products of their time, and what the impact of that is. To me it’s encouraging that Hollywood has made some great strides in the portrayal of women in films.

As I mentioned before, I definitely want to watch more Hitchcock movies. This one was more suspenseful than scary, which was fine by me since I have a hard time handling horror films. 😉 Next time, though, I think I’ll try to be brave and attempt one of Hitchcock’s scarier flicks, like “Psycho.”