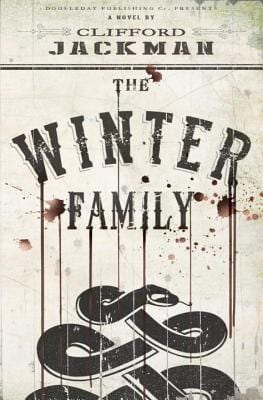 Any reviewer will tell you, the real joy of this job is being surprised by a new writer who puts forth something radically different from anything you’ve ever read before. Now we’ve read our share of western titles from traditional pulp oaters to the more sophisticated noir tempered offerings of the 70s and 80s. But none of them prepared us for Clifford Jackman’s “The Winter Family.”

Imagine the history of the post Civil War era 1864 to 1900 as told through the eyes of Sam Peckinpah’s Wild Bunch. If you can do that, then you’ve a half-way decent chance of understanding this violent saga of brutality born on countless battlefields and then unleashed on a burgeoning frontier like a twisted, blood-letting plague.

At the center of it all is Augustus Winter, a young man raised by a heartless preacher whose only touch was that of a leather strap. In the Union Army, as part of Sherman’s scorched-earth march to the sea through Georgia, Winter finds himself surrounded by other broken souls. Men whose moral compasses are shattered by the horrors that surround them until to survive, they give in to their primal natures and become comfortable with meting out death and destruction to all who cross their paths.

These include Quentin Ross, a bonafide psychopath who takes pleasure in killing women and children. Fred Jackson, a freed slave wanting only to flee his tortured past and make a new start. The empire brothers, Johnny Charlie, two reckless, simpletons soon addicted to violence until it is the only thing they relish. Bill Bread, the alcoholic Indian seeking redemption in a bottle and Sgt. Jan Mueller, a German immigrant conscripted into the army the second he stepped off the boat in New York. By the time the war is over, these men find themselves unwilling to give up their killing ways. They soon become federal agents hunting members of the Klan. When that campaign ultimately wanes along with the half-hearted reconstruction of the South, they move ever westward until they arrive in Chicago as hired mercenaries for the Republican Party to assure a victory in the next municipal elections.

When that goes awry, the Winter Family, as they are ultimately named by the authorities head to the badlands of Oklahoma as unrelenting scalp-hunters after the bounty placed on the renegade apache named Geronimo. Like “The Wild Bunch,” the Winter Family is racing against time and the ever encroaching juggernaut that is civilization. Their world is diminishing and they are all too aware none of them will die of old age. This book is filled with one frenetic gun fight after another until the finale when the last of the bad men charge headlong into hell with guns blazing.

“The Winter Family” is a reading experience you’ll remember long after you’ve finished it. Jackman is a born storyteller who leaves it all on the page. We can’t see what he offers up next, though topping this book will prove to be a real challenge.