Posted 2 weeks ago by Nathan 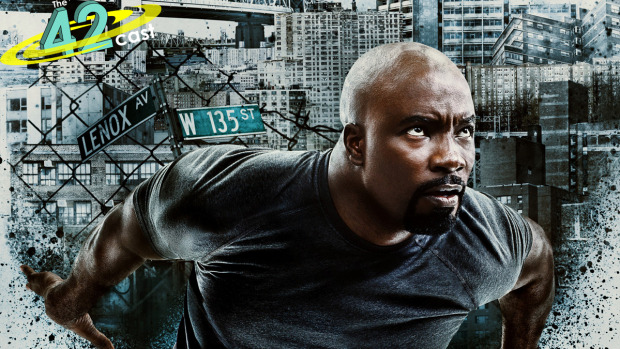 Luke Cage was one of the big hits for the initial run of Marvel’s Defenders line of TV shows. Featuring topical storylines and a fantastic soundtrack, Cage resonated with many viewers. In this episode we discuss Cage’s second outting and whether or not it held up to the hype. Along the way we’ll talk about new characters such as Tilda and Bushmaster. We’ll also talk about all the returning cast and how we feel that their stories have evolved since season 1 and how we like it. We’ll also discuss what we like about the show and if season 2 delivered. Finally, we’ll discuss what we would have wanted for season 3 if we’d gotten one.

The five-minute controversy this week asks if the Russos were right to cut Howard the Duck from Avengers: Infinity War.

This week Anji, Mike, and Jennifer join the cast.

Like what you heard? Follow us on Facebook at www.facebook.com/42cast. You can also find us on Twitter as @42cast. We can also be found on Stitcher Radio, Google Play, Spotify and iTunes. Please, leave us a review. Have a question for the Ultimate Answer? E-mail us at everything@42cast.com.