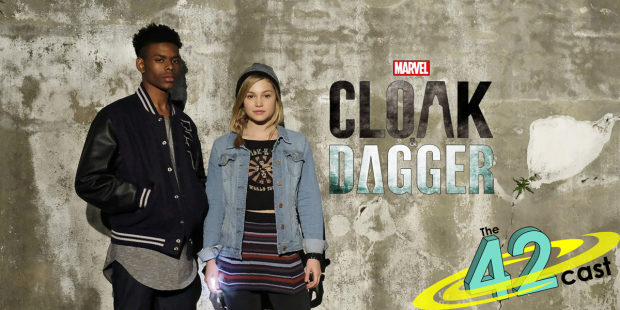 Come celebrate 50 episodes of The 42cast. Unlike other podcasts we’re not doing anything special. We’re just bringing you the same great reviews that you’ve come to expect from The 42cast. This time we discuss season one of Marvel’s Cloak and Dagger. The series is a bit of a looser adaptation than many other Marvel properties and skews far younger in the demographics. This week we discuss the series, how it works as an adaptation, and how well it works in its own right. We’ll also discuss stylistic choices, how it stacks against the CW and Marvel’s Runaways, and make much ado about their musical choices.

This week’s Five Minute Controversy asks if we should listen to aggregate review sites such as Rotten Tomatoes.

This week Ryan and Mike join the cast.

Show Notes:
Mike’s Nelson’s much improved ending to Cloak and Dagger Season One