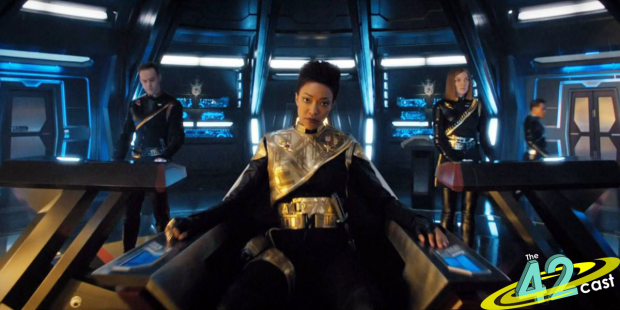 Star Trek: Discovery relaunched the Star Trek franchise on TV after a hiatus of over a decade. Set before the original Star Trek series, Discovery’s slick look and darker tones evoked polarization in fandom as some gravitated towards the update and others rejected what they saw as an affront to Gene Roddenberry’s vision of the future. In this episode we talk about those issues as well as the decision to market this on streaming service, CBS All Access instead of on network or cable television. We’ll also discuss the casting, storylines, and themes. We’ll also ask that ephemeral question, “Is this Star Trek”?, before we finally finish up with speculation on the future.

This week’s Five Minute Controversy asks if it’s a good idea for Quentin Tarantino to direct a Star Trek film.

This week Ryan, Michael, James, and Stephanie join the cast.