Posted 10 months ago by Ashley Pauls 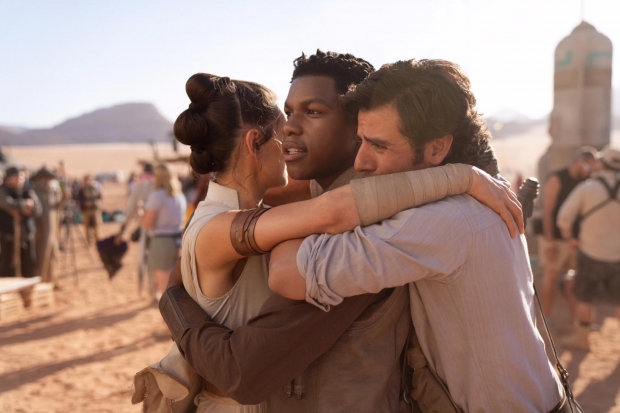 Now that I’m finally recovered/unpacked from Star Wars Celebration (well, mostly), it’s time to dive into that Episode IX teaser trailer! There’s a lot to speculate about in the new two-minute trailer, especially now that we also have an official title: “The Rise of Skywalker.”

Before we get started, this post is just meant to be for fun; when it comes to my expectations/hopes for this movie, I’m trying to keep a pretty open mind. I think it’s fun to come up with theories about what might happen, but I also understand that I could be 100 percent wrong about all of this.

Also, I know some people don’t like to speculate, and they prefer to walk into a movie knowing as little as possible so they can be surprised. That’s totally fine. But if you’re like me and want to geek out about this trailer in (possibly excessive) detail, let’s dive on in!

Every generation has a legend…

The trailer opens with a blank screen and the sound of Rey’s breathing. When the camera cuts to her face, we see her staring across a desert landscape, facing down a screaming TIE silencer. Then, she ignites her lightsaber and flips over the ship.

Of course I squealed the first time I saw this clip, because I loved getting to see one of my favorite female Star Wars characters being a total badass. However, besides just looking cool, there are some potential plot details to unpack here.

The obvious guess as to what’s going on is that Kylo has shown up for a rematch after their showdown in Snoke’s throne room, where they both tried to grab the legacy lightsaber. But I’m not certain that’s what actually happening.

When we first see Rey, she looks nervous and uncertain, which is intriguing. When Rey is prepping for a fight, she normally has this look of intense determination on her face. I think she’s waiting for something but doesn’t know what to expect. Also, if Kylo’s intentions are hostile, why isn’t he firing on her?

It’s possible this scene is actually part of their Forcebond and Kylo isn’t physically there; as we saw in “The Last Jedi,” their connection through the Force is so strong that they can pull elements of their physical surroundings into their conversations, such as the rain on Ahch-To and the hand touch in the hut. Maybe Rey is “seeing” Kylo even though he’s not actually on the planet where she is.

I’ve heard other speculation that they’re actually training together and teaming up to face the movie’s “Big Bad” (more on that later!). Or maybe Kylo isn’t the one piloting the silencer after all.

In any case, any and all of these clips could have been edited and/or digitally altered to prevent us from really guessing the plot, but it’s always fun to guess.

The saga comes to an end…

Lucasfilm has really been stressing that Episode IX is the end of the Skywalker saga films. Now, of course 5-10 years down the road we could be seeing an Episode X, but I do feel like Episode IX is going to have a definitive ending of some sort.

Not everyone may agree with this interpretation, but I really do believe Kylo is going to get a redemption arc in this movie. I just don’t see them ending this nine-part saga with the final Skywalker dying as a villain. (I do NOT believe Rey is a Skywalker, and I do NOT want them to retcon her parentage reveal in “The Last Jedi.” As you can probably tell, I have strong feelings about this.)

Star Wars is all about hope and redemption, and I want the saga to end on an upbeat note. Of course, Ben Solo does have a lot to atone for, and I’m really curious to see what a potential redemption arc for him would look like. It needs to be handled with gravitas and nuance, but I have full confidence Lucasfilm can pull this off.

Based on some other photos/speculation I’ve seen, I’m guessing something will happen in the first act of the film that motivates/forces Kylo to seek out the Resistance and team up with Rey and Co.

Otherwise, we don’t get a lot of Kylo in the trailer, aside from that super cool clip of him slamming some antagonist with the hilt of his lightsaber in a red-tinted forest (my second-favorite scene from the trailer). Maybe he’s fighting the Knights of Ren? And we see his helmet being repaired, which I think makes sense thematically.

After Kylo’s life pretty much falls apart in “The Force Awakens” and “The Last Jedi,” I can definitely see him scrambling to put things back together, with the broken mask serving as an important metaphor. Or again, maybe Kylo’s not even using the helmet himself, and somebody else is dressing up as him to cover for the fact that he’s left the First Order.

Basically, I could fall into a rabbit hole of discussion here if I allowed myself to.

I know this is one of my more rambling blog posts, but there’s so many details to latch onto here, and any one of them could be expanded into a post of its own. But, let’s move on…

This is me, by the time December finally rolls around.

No one’s ever really gone

The shot of Lando flying the Falcon with Chewie was just wonderful and brought a big smile to my face. And seeing the Yavin medal and watching Leia hugging Rey triggered the waterworks for me, big time. I’m glad they were able to find some usable footage from the past films so that Carrie Fisher can still have a presence in this film.

I also love the clip of Poe, Finn, and C-3PO flying some kind of landspeeder while weapons are firing. I’m thinking part of this film, at least, will have a fun action-adventure vibe, ala “Indiana Jones” and the 1999 Mummy film.

And I got chills seeing the Death Star wreckage sticking out of the ocean. I REALLY did not want to see another Death Star-type super weapon in Episode IX; however, I will make an exception for the wreckage of a past Death Star. Not only does it offer some cool cinematography, it ties in with what I believe will be the movie’s theme, which is healing the rift between the dark and light sides of the Force and making peace with the past.

It also ties into the fact that apparently, Palpatine is back! It’s funny because if you’d asked me before watching this trailer if I would be okay with Palpatine returning, I probably would have said “no.” But that laugh at the end of the trailer was a fantastic twist, and there are actually some cool things they could do with this character’s return.

I’ve heard some people saying that according to canon, Sith cannot manifest as Force ghosts in the same way that light side Jedi can. But I could totally see Palpatine as some sort of malevolent Force spirit/presence lingering on after death and “haunting” the remains of the Death Star. I’d love to see Rey and Kylo team up to defeat Palpatine once and for all, finally healing the troubled Skywalker legacy.

The Rise of Skywalker

So, about the title — I actually didn’t *love* it at first, partly because I was more attached to some of the other speculated titles like “A Spark of Hope” and “Balance of the Force.”

But “The Rise of Skywalker” is really starting to grow on me, and I’m curious to see how it will fit with the story they’re planning to tell. I definitely don’t think the Skywalker in the title is just referring to the Force ghost of Luke. It’s referring to all the generations of Force-sensitive Skywalkers — Anakin, Leia, Luke, and Ben — finally finding peace in the Force.

And who knows, maybe all Force users will take up the name “Skywalker,” moving away from the word “Jedi,” which at this point comes with a lot of baggage.

Anyway, I could go on and on about this trailer, but those are my initial thoughts. I’d love to hear what your predictions are regarding the trailer. What do you think will happen in Episode IX?