Home Return of the king(s): Quick movie reviews for ‘Rocketman’ and ‘Godzilla: King of the Monsters’

Return of the king(s): Quick movie reviews for ‘Rocketman’ and ‘Godzilla: King of the Monsters’

Posted 12 months ago by Ashley Pauls 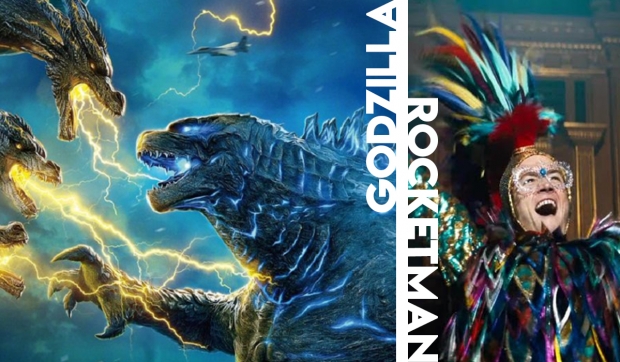 What do “Godzilla: King of the Monsters” and the new Elton John biopic “Rocketman” have in common? Well, not much, actually. But I saw both these movies this past week, and since I didn’t have time to do separate, full-length reviews, here are my quick thoughts on each.

It’s not often that I’ll see two different movies on opening weekend, but I was intrigued enough by the trailers that I wanted to see them both right away, especially since we’re now in the middle of summer blockbuster season and there’s a new movie I’d like to see pretty much every weekend.

First, let’s tackle “Godzilla: King of the Monsters.” My response to its predecessor, “Godzilla,” back in 2014, was something along the lines of “meh.” Godzilla himself was awesome, but he wasn’t in the film nearly enough, and the human characters surrounding him weren’t super compelling.

“Godzilla: King of the Monsters” fixes one of those problems, but unfortunately still struggles in the other area.

Every time there were monsters on screen fighting, this movie was magnificent. It was gloriously over the top, and I watched all the scenes involving the monsters with a sense of childlike glee. The 2014 “Godzilla” had too few scenes of monsters fighting, but this movie has plenty. Watching Godzilla, Mothra, Ghidorah the three-headed dragon, and others was so much fun. I’m glad I decided to see this movie in IMAX, because the fights were amazing.

Sadly, the movie still suffers when it comes to the human characters. I really wish both of these Godzilla movies had featured Ken Watanabe’s Dr. Ishirō Serizawa as the main character, instead of relegating him to a more supporting role. They could have gone a lot deeper with this character and his reaction to the monsters. I won’t give away any spoilers, but the scene where he finally gets to come face to face with Godzilla is actually quite moving.

I’ll definitely watch more of these monster movies, but I hope they will work on adding more depth to the human characters. While it’s fair to say that the monsters are always going to be the main draw for these films, the humans around them don’t have to be two-dimensional. More nuanced characters would have made this film more memorable. As it stands now, it’s summer popcorn fun, but not much else.

I actually decided to see this movie based solely on the strength of the previews. I saw them multiple times while going to see other movies, and this film looked really interesting and fun.

While I’m not super familiar with Elton John or his music, I do enjoy listening to his songs. I’ll always stop for “Rocket Man” or “Tiny Dancer” when I’m scanning through radio stations in my car.

“Rocketman” is actually more of a big screen musical than a biopic, and I think that concept works really well, considering Elton John’s vibrant and creative stage persona. The musical format allows the filmmakers to work in all his famous songs, but in an unexpected way.

All the musical sequences are really fun, but what I wasn’t prepared for was how tragic this movie was going to be at times, and all the struggles Elton John went through early in his career.

Growing up, his family didn’t provide the emotional support he so desperately needed. He falls in love with his manager, John Reid, who later uses and betrays him. Elton uses drugs and alcohol to cope with his crushing loneliness, and he hides his true self behind the glitz and glamour of the world of stardom.

Elton John is played by Taron Egerton, who I’ve been a fan of since the Kingsman movies. While his voice may not sound exactly like Elton John’s, Egerton gives a heartfelt and committed performance. Although the movie has numerous fantasy sequences, the story it tells is moving and authentic.

In short, I’d definitely love to see more biopics like this one. Sure, some of the details might not be strictly historical, but the style of this movie fits with the subject it is portraying.