‘Murder In the Ball Park’ Book Review By Ron Fortier

Posted 11 months ago by ESO Network 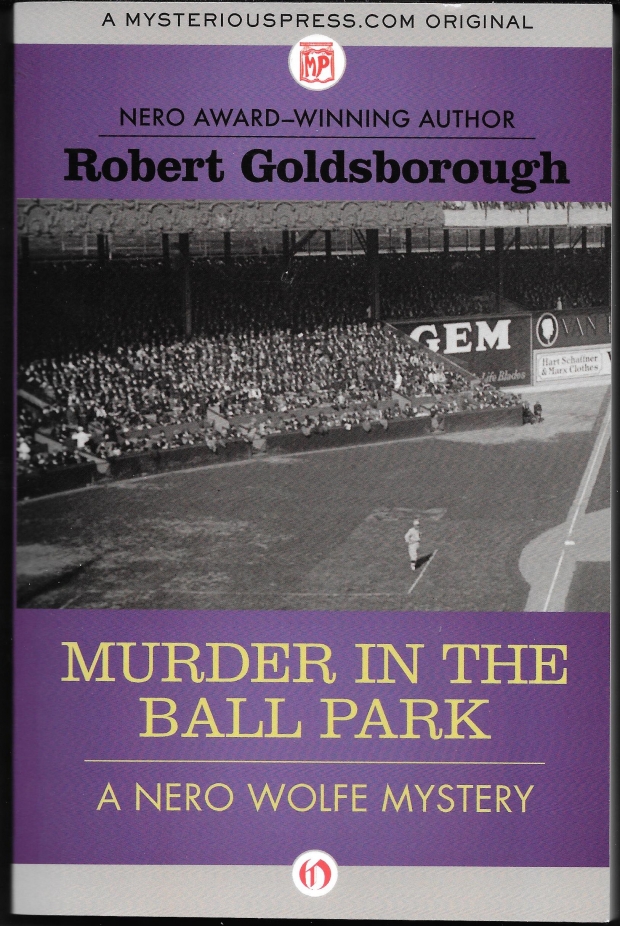 As we love both baseball and Nero Wolfe mysteries, this new entry by Robert Goldsborough was a much anticipated read. Happily it did not disappoint in any way offering up another intriguing murder and the all too familiar investigative routines originating from the brownstone at West 35th Street in New York.

The story opens with Archie Goodwin and his pal, Saul Panzer, attending a Giants vs Dodgers game at the Polo Grounds. Upon arriving, they learn it is Flag Day at the ballpark and among the dignitaries on hand is State Senator Orson Milbank and his entourage. At the top of the 4th inning a homerun is hit into the second deck area over left field and as the crowd of thousands jump to their feet to cheer, the Senator keels over having been shot in the head by an assassin’s bullet. By the time Archie and Saul reach Milbank, he is dead. Several days later the Senator’s widow, a much younger former Hollywood actress, calls the Brownstone requesting to emply the famous Nero Wolfe to solve her husband’s murder and bring the killer to justice.

The late Rex Stout, Wolfe’s creator, was a genius in developing a mold by which the rotund detective’s tales would be laid out. Basically Wolfe never leaves his home. Rather he assigns Goodwin to do the leg work; which also includes interviewing the various suspects. Archie has a knack for remembering conversations verbatim and these he reports back to Wolfe. When all the pieces of a puzzle have been assembled in the tale, Wolfe deduces the solution and has all the suspects invited to his office where he then reveals the “how it was done” and the killer’s identity. It is a formula Robert Goldsborough has captured perfectly in these new Wolfe mysteries which is why we love them so much.

Much like the Sherlock Holmes and Doctor Watson stories that clearly inspired Stout, the mysteries themselves often prove secondary in importance to the actual fun of simply “being” with these wonderful characters. “Murder In The Ball Park” is no exception. If you are Wolfe and Goodwin fan as this reviewer is, you will relish every single scene in this dandy little caper where in the end, murder strikes out.