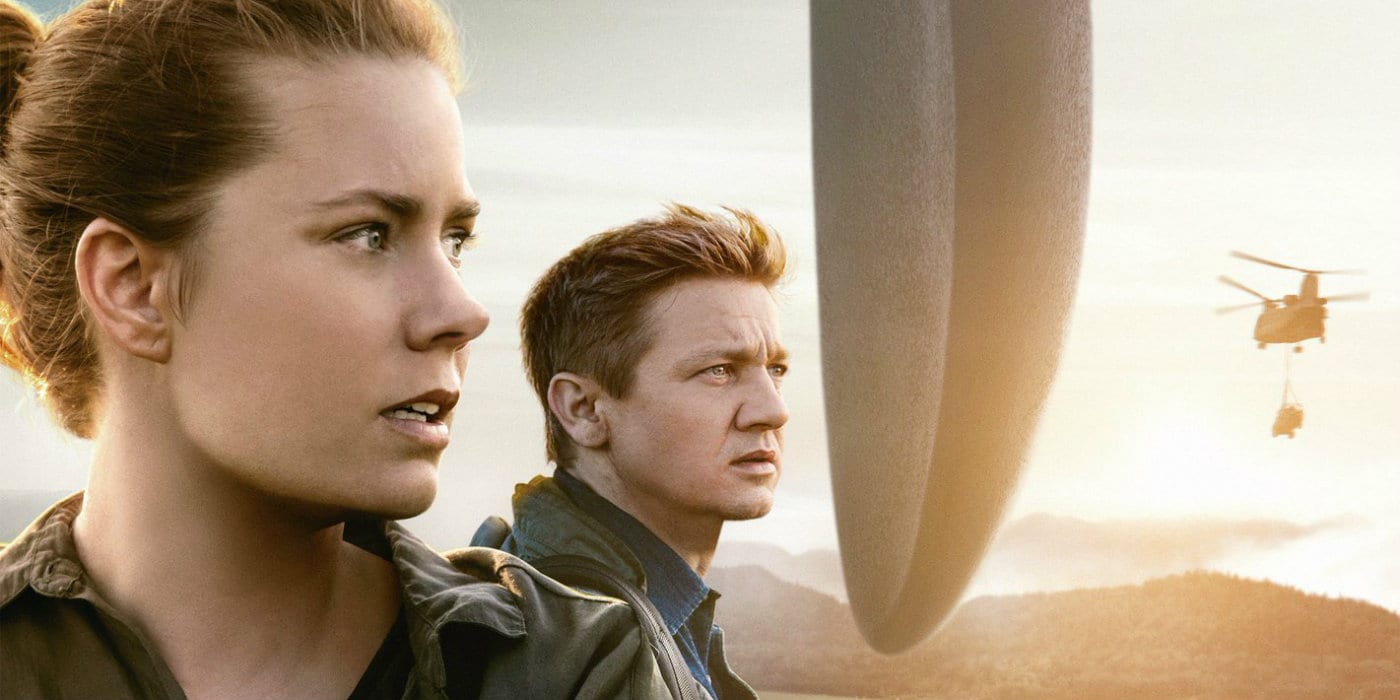 One day without warning, 12 strangely-shaped alien ships appear on the Earth’s surface, landing at various sites around the globe. Humanity’s natural reaction to these vessels is to panic, especially since the aliens’ purpose remains unclear. Are they here to investigate or invade? Do they actually want to communicate with the humans or do they merely want to gather information to use later on in an attack?

The U.S. government recruits linguist Dr. Louise Banks (Amy Adams) to help them attempt to communicate with the aliens. Although Louise has done difficult translation work before, this will be the greatest challenge of her career. The aliens speak in a series of unintelligible sounds no one can seem to understand. However, Louise has a breakthrough when she convinces the aliens to start writing down their language — although their version of “writing down” is actually squirting circular inky shapes into the air. As Louise begins to decipher their language and communicate in return, the aliens send her what could be a threatening message…or perhaps she’s just misinterpreting it. She’ll need to decipher it quickly before other countries around the world respond with violence to the mysterious aliens and perhaps trigger a doomsday event.

Although “Arrival” was actually released in theaters back in November, my plans to see it never managed to work out and then I got caught up in all the buzz about “Rogue One.” However, I’m glad I made the time to catch this film while it was still in theaters. Science fiction comes in many varieties, and “Arrival” is of the smaller scale, more intimate type. While I do love big space battles and action sequences, sometimes it’s also nice to dial things back a bit. Even though there’s not a lot of “action” in this film, “Arrival” is still very suspenseful as Louise and her team try to figure out the aliens’ purpose in coming to Earth.

The music and special effects are sparse but used very effectively, serving to increase the sense of mystery. I won’t say much about the design of the aliens, because I think discovering what the aliens look like adds to the suspense, but I appreciated how eerie and otherworldly they looked (of course, the humans probably looked eerie and otherworldly to them). I loved the aliens’ method of communicating; I thought it was a creative departure from what we’ve seen from “alien languages” previously in films.

The film does have a major twist in the final act, sending the movie in a direction I didn’t suspect. I had some questions about the aliens that weren’t ultimately answered but I think the ambiguity was necessary, even though I really wanted to know more. While “Arrival” is a very different type of movie from “Rogue One,” both movies had the same central theme: hope. And it’s a theme that feels very relevant in a challenging year.

“Arrival” highlights the importance of working together for a common goal and the dangers of letting our differences divide us (many countries in the film are reluctant to share their alien intel even though everyone on Earth is facing the same threat). “Arrival” also contains an unexpected but moving reflection on the need to embrace life, with both its joy and its tragedy.