Home Movie review: ‘Aquaman’ is a wild and wacky dive into the DC Cinematic Universe

Movie review: ‘Aquaman’ is a wild and wacky dive into the DC Cinematic Universe 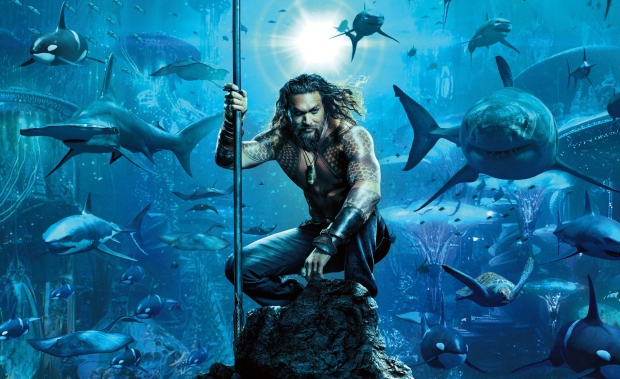 It’s fair to say that DC Comics has sailed through some choppy waters as it seeks to build its own cinematic universe. (As a quick aside, I feel like I need to apologize for all the water-related puns that I’m going to be dropping in this review. Since I’m writing about “Aquaman,” I just couldn’t help myself. I’m sorry.)

“Wonder Woman” remains the crown jewel in the DC cinematic universe, and while I don’t think “Batman v. Superman” received enough praise for the things it did well, for me at least “Justice League” was a letdown. As a direct follow-up to that film, “Aquaman” needed to make a splash at the box office and get the franchise back on track.

While an argument could be made that “Aquaman” could’ve been a stronger film overall, it is a fun ride, and is a step in the right direction for the DC cinematic universe.

“Aquaman” is sitting at a respectable 68 percent on Rotten Tomatoes, and the “critics consensus” blurb is actually a fairly accurate summary of what you can expect from this film: “‘Aquaman’ swims with its entertainingly ludicrous tide, offering up CGI superhero spectacle that delivers energetic action with an emphasis on good old-fashioned fun.”

To quickly summarize the plot: Although Arthur Curry a.k.a. Aquaman (Jason Momoa) has decided to embrace his superpowers and help those in danger on the high seas, he doesn’t really want anything to do with his Atlantean heritage. His mother Atlanna (Nicole Kidman) originally fled the underwater paradise and fell in love with Arthur’s human father (Temuera Morrison), but was eventually forced to return to the ocean’s depths.

Arthur’s half-brother Orm (Patrick Wilson) has become king in his place, and Orm’s dangerous obsession with power threatens to bring war to both land and sea. Thanks to a push from Princess Mera (Amber Heard) — and the help of a powerful, mythical trident — Arthur decides to finally claim his destiny.

There are parts of “Aquaman” that are really great, and some parts that are more just “okay.” I actually really liked the mini arc that featured the love story between Arthur’s Atlantean mother and human father. I enjoyed seeing Temuera Morrison’s performance in Star Wars (Jango Fett and voices of the clone troopers), and I’d love to see him in more big-budget films.

I also really enjoyed Jason Momoa’s performance as Aquaman. He’s clearly having a fun time playing this character, and that in turn makes him fun to watch. I might not have predicted it originally, but the “super-bro” take on the character actually works really well. I also enjoyed Mera’s character. I feel like Hollywood has been doing much better with its portrayal of female characters in big-budget movies; Mera is Aquaman’s love interest, but she’s also an important part of the plot and gets plenty of her own action scenes. It’s cool to see her and Aquaman working together and mutually respecting each other.

The villain character is one of the film’s weaker spots. I felt Patrick Wilson was chewing the scenery a little too much (although the final scene with this character was an interesting twist I wasn’t necessarily expecting). The more interesting villain was Black Manta (Yahya Abdul-Mateen II). His story felt somewhat shoehorned into the plot, but I really loved the character and the performance, and I definitely want to see more of him in the DC cinematic universe. I would have liked to see him play an even bigger role in the events of “Aquaman.”

The film’s special effects did vary a little in quality. There were some moments where the underwater scenery really blew me away; it was gorgeous and strange and otherworldly. I saw some things I had genuinely never seen on screen before, and I loved being immersed in that world. At other moments, though, the CGI was applied a little too heavily, and the scenery ended up looking a little fake (similar to what happened in the Star Wars prequels).

Also, there’s some genuinely bonkers stuff in this movie — and I do mean that as a compliment. At one moment, Arthur shows up in this big underwater battle between a bunch of crabs and sharks, and he himself is riding this giant kaiju-like monster. Was it over the top and a bit ridiculous? Yes. Was it fun to see? Most definitely yes. “Aquaman” doesn’t take itself too seriously, and the film is better for it.

In short, the film does have spots where the plot drags a little, and some concepts could have been executed more strongly. There’s also a lot of little side-plots that could have been connected more seamlessly (Black Manta, the quest for the trident, etc.).

But in the end, I did have fun watching this movie, and I was definitely never bored. I wouldn’t mind diving into this part of the DC universe again (final water pun, I promise!).