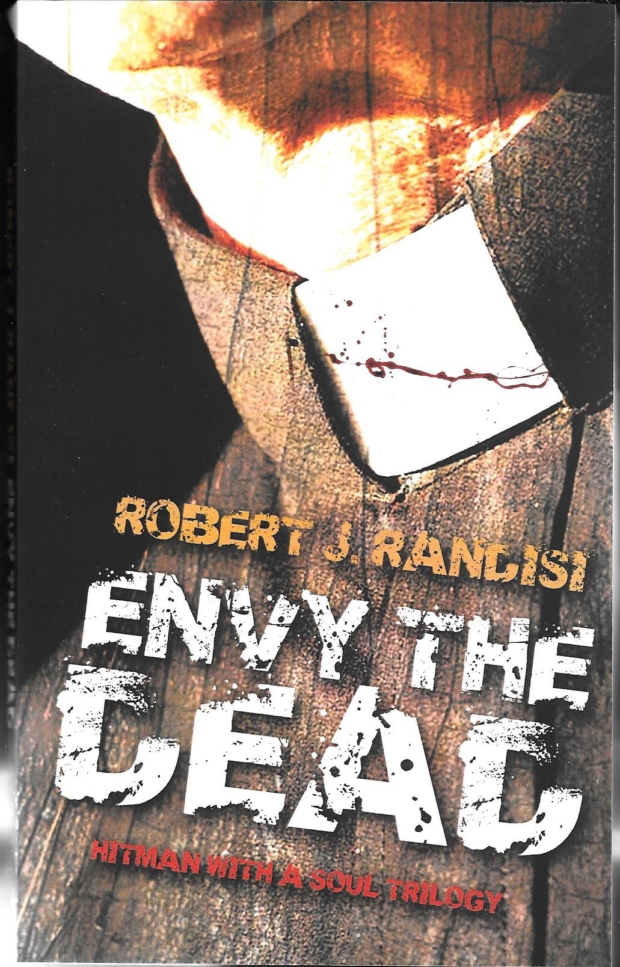 ENVY THE DEAD
By Robert Randisi
Down & Out Books
273 pgs

Sangster was one of the best killers in the death-dealing business until one day he woke to discover he had a soul. Translate to conscience and because of that unexpected epiphany, he retired immediately. Now, one of his few friends aware of his old career, Catholic priest Father Patrick, comes to Sangster looking for help. Years earlier, while assigned to a parish in Philadelphia, a young twelve year old altar boy committed suicide after claiming he had been abused by a priest. Father Patrick swore he was not that priest, whereas the boy’s father, mobster Jimmy Abbatello doesn’t believe him and puts out a contract on the cleric. The Bishop quickly has him reassigned to a parish in New Orleans and for the next decade Father Patrick believes he’s actually escaped the obsessed Abatello.

Then one day the priest runs into one of the old Philly hoods in a public square. Though he ducks away fast, he is unsure as to whether the fellow spotted him. Worried that such is the case, he seeks out Sangster and thus the novel begins. Randisi is one of those old pros in the crime genre who has gotten so good at telling these kinds of stories, his prose is economical and his dialogue sharp, crisp and fun. These are the traits every writer works at as they are the elements that make prose either convoluted or, like this novel, enjoyably readable. The pages seem to turn themselves, that’s how smoothly Randasi spins his tale.

Sangster reluctantly agrees to help and eventually learns a notorious hitman known as Frankie Trigger has taken the contract and is already in New Orleans. But Sangster isn’t without his own support in the retired ex-Sheriff Burke, a wiry character always ready for a little action. If all this wasn’t enough, Sangster gets another surprise when a beautiful young woman named Roxy shows up claiming to be the daughter of his former controller. She wants Sangster to teach her to be a hired gun.

“Envy The Dead,” is one of those rare thrillers that delivers memorable moments without ever straining credibility. In the end, it’s about people, flawed, imperfect and simply wanted to get by in a world too often cold and uncaring.