Posted 6 years ago by Nathan 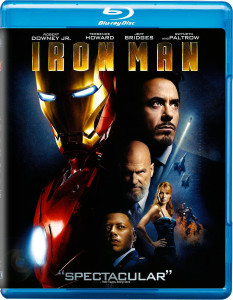 With Marvel firing on all cylinders and Phase Two of its movie series under way, it seemed like a great time to review their Phase One of movies and also to take a look at the media itself. This series of articles will not only review the Marvel movies but also look at the value added by the DVDs and blu-rays and whether it is worth your time to get the hard media. The first movie in Marvel’s Phase One is Iron Man.

One of the first things that jumps out at me as a viewer of Iron Man is that Robert Downey Jr. is amazing as Tony Stark. He really brings home the idea that Tony is a self-centered, arrogant jerk but fills him with enough humor and channels it in the right direction so that the audience is okay with following this guy. This was always going to be the most difficult aspect of doing Tony right. Stark is a control freak. He thinks that because he’s a genius he is always right. Downey Jr. was both faithful to that and made the role his own. Jeff Bridges is also fantastic as Obadiah Stane. Giving Tony someone with such a connection to both his Iron Man and Tony Stark sides was a stroke of genius on the part of the writers. Anyone who has seen the DVD extras knows that originally this movie was going to feature the Mandarin along with the Crimson Dynamo. I am really happy that they didn’t go this route. The two villain thing rarely works and both would have been external threats. The 10 Rings organization hinted that the Mandarin may be part of the greater story, but it was definitely acceptable not to have him in the debut movie, especially when so much of the story revolved around Tony’s origin as a hero.  After all, the Mandarin’s ties to Iron Man’s origin was a latter-day retcon anyway. He didn’t show up for several issues after Iron Man debuted. I do think that several other franchises should learn from this and realize that they don’t need to bring out the biggest bad guy for the first film as then you have nowhere to go in successive movies.

It would be remiss of any review not to mention Gwyneth Paltrow as Pepper Potts. Paltrow navigated such a difficult line in this movie. She had to be the perfect administrative assistant while at the same time also having some real caring for a boss who sometimes did unsavory things that she did not respect, yet also not letting her emotions rule her and having the strength of will to stand up and voice it when they could be crossing an ethical line.  I think that things really went downhill almost immediately once they officially got together, but here the relationship is fresh and sparky. Through Pepper we get the feeling that at some point Tony had been a different person and that he’s become more calloused over the years. It might have been nice if we’d been shown or told about some of the things in his earlier life that had shown Pepper that other side of him or it would have been nice if there had been subtle nods to his humanity before he left the desert. The lack of these things does not detract too much from the overall narrative, but it would have been nice to have. There is also some brilliant humor between them such as the scene where he compares her helping him with replacing his arc reactor with the classic game, Operation.

For the other supporting roles Terrence Howard really does a fantastic job at playing James Rhodes and it is a real shame that he was replaced in the later two films. He really sells that he and Tony were friends and they had some great interplay in a way that Don Cheadle never does. Jon Favreau brings a touch of humor as Tony’s head of security/driver, Happy Hogan. Happy doesn’t do much in this one but it is very amusing if you listen to the DVD extras to discover that the reason that Favreau cast himself as Hogan was because he wants to get to the point in the story where he gets to marry Pepper. This is also the movie that introduces audiences to Agent Coulson played by Clark Gregg. It’s unlikely that those who ever saw the movie back in 2008 could have realized how important Coulson would become to the entire Marvel cinematic universe. Gregg really steals the show with his persistence and his deadpan expression during some very unlikely events, which gives his character a dry humor that really endears him to viewers. Stan Lee also made one of his trademark appearances in a Marvel film. Over the years Stan’s appearances have felt somewhat intrusive but appearing as Tony’s buddy Hugh Heffner, Stan doesn’t need to do anything other than stand still while surrounded by beautiful ladies. The humor injected into the scene for those who know Stan and his legacy is fantastic but it isn’t distracting or annoying for those who don’t really know the comic background for the character.

The update to Iron Man’s mythology is well done. With much of the action taking place in Afghanistan and with talk of arms deals and insurgencies the movie takes on a topical tone to the era much like the original comic book had with its Cold War parable throughout the 60’s down to the 90’s. The movie also captured the character’s love of invention and by allowing the viewer to experience the process with Tony, it not only showed a side of his character but as he pieces the suit together and works out what he can do, it allows the viewers to get used to this hyper-reality.  All-in-all it comes across as a very well-developed and polished work. What makes that even more amazing is that apparently a large part of the most important scenes were improvised. You see some of that in the DVD extras.

The main flaw with the movie lies with the ending. Revealing that Tony is Iron Man just opened a can of worms and the other movies have been dealing with it ever since. It gave a great moment at the end of the movie but the writers of subsequent Iron Man films have been left to deal with the ramifications, and it has needlessly hamstrung the movies making it very difficult to deal with the issues with his company and personal life now that the public knows that he’s Iron Man. The second ending helps to ameliorate this somewhat. For those watching the movie for the first time in theaters, Sam Jackson’s appearance was totally unexpected and the idea of Iron Man joining a cinematic world of other superheroes was deep with promise and still manages to excite viewers with the endless possibilities today.

With regard to the DVD and Blu-Ray experience, Iron Man is unusual in that the 2-disc DVD edition contains more extras than the blu-ray. Likely this is a fallout from the time when movies were released on DVD first. The blu-ray contains the deleted scenes and a documentary on the history of the Iron Man comic. The 2-disc DVD contains those extras as well as a 90-minute featurette on the making of the movie as well as some featurettes on the digital development and several screen tests. I checked on the extra blu-ray included in the Phase One box set and that doesn’t contain these “lost extras” for Iron Man either, although that would have been an appropriate venue for them. Neither the DVD nor blu-ray has a commentary track, which is very unusual for a superhero movie. Even if Favreau didn’t want to sit down for a commentary or felt that he’d said everything that he wanted to say in the extras it would have been nice to get the perspective of the writers, producers, actors, or technical people for a commentary on their work in the film. Cinema fans who buy the hard media for the extras expect these things and it seems like a cheat not to include it. That being said, I don’t think that the blu-ray version adds a great deal to the movie. The visuals are somewhat enhanced but your only other extra is that the audio is designed for a 7.1 surround system.

For me Iron Man remains the second best of all of the Avengers films and it is well worth buying a hard copy for your collection. I personally recommend the 2-disc DVD set for the additional extras, which help to show the creation and evolution of the film, but if you have a 7.1 surround system it may be worth getting the blu-ray version with slimmed down extras. 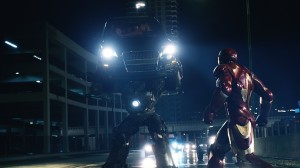