Posted 9 months ago by Mary Ogle 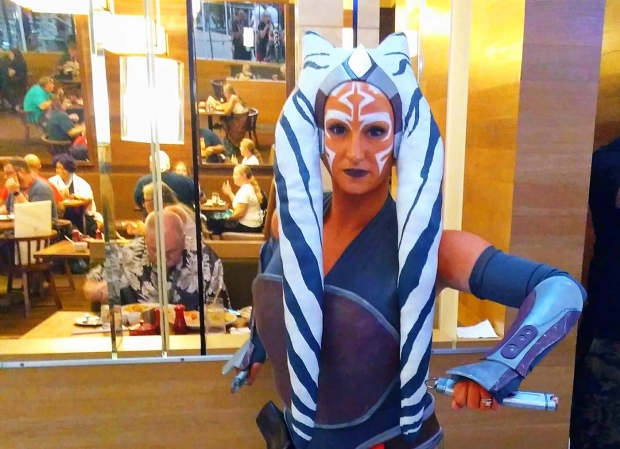 Dragon Con Saturday begins with “Deconstructing Doctor Who” and ends sharing space with almost every other fictional character, some of them combined.

First up is “What makes the Doctor, the Doctor”. My fellow co-hosts and I on Earth Station Who lead a fun and fascinating discussion on what character traits and story tropes define the Doctor across their regenerations. The audience joined in with plenty of questions and comments and we all had a great time deciding what truly defines the Doctor.

The rest of Saturday is spent hanging out with old friends, making new ones, and taking hundreds of pictures of brilliant cosplay.. The creativity on display at Dragon Con is stunning. The time and effort spent putting together elaborate costumes is one of the best parts of the con and a testament to human ingenuity. My favorites are often the mashups as they are a way to take a character (or two) a step farther and bring something new to life.

Sunday starts out with a hilarious and warm-hearted panel featuring actors from the Orville. Mark Jackson (Isaac), Peter Macon (Lt. Cmdr. Bortus) and J. Lee (Lt. John LaMarr) are gracious and generous with stories from the Orville set. They also tell tales of past jobs and previous acting jobs. Peter Macon emphasizes how his background as a Shakespearean actor has influcenced the character of Bortus and allows him to bring depth to the Orville’s world. They all praise Seth McFarnland not only for his vision but also for the trust he places in his actors. They discuss how satire is used as way to approach and explore profound topics and the importance of fighting for what you believe in.

Next I head over to the Westin for a panel by urban fantasy author Patricia Briggs. It makes me so happy to see a large turnout for this expressive and inventive writer. Ms. Briggs is welcoming, funny and intelligent, answering questions with a warm sense of humor and making each fan feel understood and appreciated.

In the evening I head over to the Hilton for the Elton John / Queen sing-a-long and it proves to be one of the highlights of the con. The room is packed, Queen Elizabeth, her corgi and several iterations of both Freddie and Mercury and Elton are there and we all go to town on some of the best songs ever written. The space is filled with joy and the only grumbling I heard was that it ended much too soon.

I end the day by sitting on a panel discussing lgbtqia+ themes in Doctor Who. I’m almost teary at the chance to talk about issues that are of such importance to me in a safe and supportive place. The audience is lively and interactive and while we don’t all agree, the respect shown for everyone’s opinion is lovely to behold. It’s rare to find spaces where you can be yourself without a constant undercurrent of fear of ridicule or even violence. Growing up in the 70’s in the deep south, the idea of a panel like this even existing, let alone being able to speak on it would have been entirely foreign to me. Yet here I am. This is why Dragon Con matters.