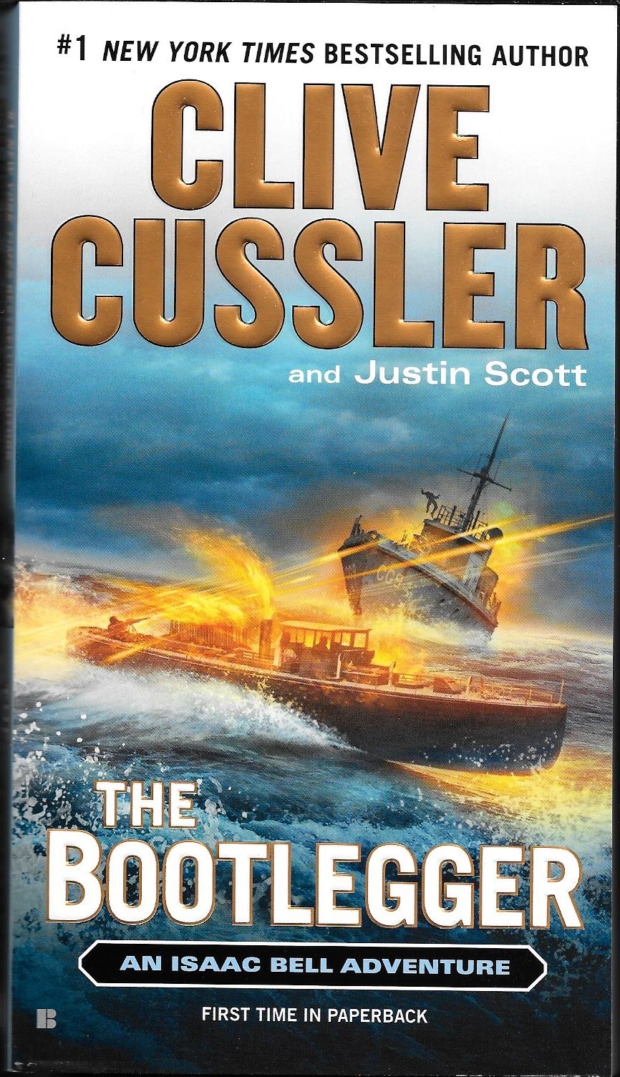 This is the sixth Isaac Bell thriller from writer Justin Scott. For the record, Clive Cussler created the characters and set up for the series in his book, “The Chase,” then handed it off to the Scott to continue. Which in our opinion is both genius and bothersome. Genius because Justin Scott is an amazing writer, bothersome in that for purely promotion purposes, the publishers always slap Cussler’s name over these books in a giant font with Scott’s shrunk down to near invisibility beneath it. But, good or bad, these cottage series have been around forever. It obvious the books make tons of money and Mr. Scott’s ego is surely compensated by his share of the royalties. As this is one of our current favorite series currently being written, we just had to vent a bit. Now on to the actual review.

Set in 1921, Prohibition is the law of the land and causing havoc across the country. In an attempt to keep his prestigious detective company free of corruption, Joseph Van Horn offers his company’s services to the Coast Guard. On an inspection tour with one of their patrol boats, they come under attack from bootleggers operating a super-fast armored cruiser equipped with machine guns. Van Horn is wounded in the confrontation and almost dies. That is all the motivation his chief agent and protégé Isaac Bell needs to mount a full out offensive against the cunning operators of that incredible but deadly speedboat. Bell will stop at nothing to find the bootleggers and bring them to justice.

But as the investigation mounts, Bell uncovers evidence that the owner of the black rum-runner may not be a simple criminal after all. With the help of Pauline Grandzau, the lovely Van Dorn agent in charge of their Berlin office, he learns that the mysterious master mind behind the increase in bootlegging activities may be a Russian Bolshevik spy whose purpose is complete destruction of America’s democratic government. Using the sale of illegal, rut-gut booze, this foreign provocateur audaciously plans to finance his campaign of terror via his quickly amassing wealth from his bootlegging operations.

From the waters of the Great Lakes down to the old speakeasies of Detroit and ending in the crystal blue waters of the Caribbean, “The Bootlegger” is a non-stop thrill ride that never once lets up, skillfully building suspense to a powerful, explosive finale pitting an old fashion hero against a heartless monster in a contest that only one will survive. We’ve never once been disappointed by an Isasc Bell thriller and this one is certainly no exception.