Home Better Late than Never blog series…goes west: ‘The Quick and the Dead’ (1995)

Better Late than Never blog series…goes west: ‘The Quick and the Dead’ (1995) 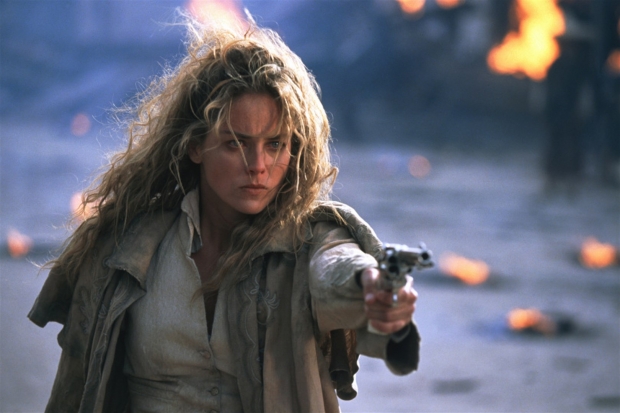 When it comes to Westerns, I’ve learned that the magic word for me is “revisionist.”

“Revisionist Westerns” are a subgenre deviating from the classic Westerns of earlier decades, with their noble heroes and more straight-forward themes. Revisionist Westerns present the view that the American West wasn’t necessarily a magical land of freedom and opportunity. More of the main characters are antiheroes, or even outlaws. The “good guys” aren’t even particularly “good.”

So far the two main Westerns I’ve watched for this blog series fall under the revisionist category — “Tombstone” and “True Grit” (at least the new version). My favorite Quentin Tarantino film, “Django Unchained,” falls under this category as well (seeing that film should have motivated me to check out revisionist Westerns sooner, but I guess that’s why this blog series is called “Better Later than Never”!).

My next film for this blog series, “The Quick and the Dead” (1995), is also classified as a revisionist Western. Directed by Sam Raimi (known for his Spider-Man trilogy and the cult horror series “Evil Dead”), the film takes place in a lawless town paradoxically called “Redemption.”

This town is run by villainous outlaw John Herod (played by Gene Hackman), who sees himself as the fastest gunslinger in the West. He fully expects to win the fast-draw competition he is hosting. The winner gets bragging rights (and a sizable cash prize), while the losers are likely to end up dead.

There are two unlikely competitors in this contest: a mysterious female gunslinger known simply as “The Lady” (Sharon Stone), who seems to have a very personal grudge against Herod; and a preacher named Cort (Russell Crowe), whose current profession hides a shady past.

As the stakes rise higher and higher, and more and more competitors are eliminated, who will be the last gunslinger left standing in Redemption?

For the first half of “The Quick and the Dead,” I actually wasn’t quite sure what to think of this movie. The tone and style of filmmaking were a little different than I was anticipating. At times Raimi’s Western is a gritty tale of revenge and redemption, but it also has campy moments that parody famous Western tropes.

I’d been anticipating a more straight-up, serious film, so it took me a little while to adjust to the kind of film “The Quick and the Dead” actually was. But once I did, I found I really enjoyed it, and I’d definitely watch it again. In fact, I think I might have more fun watching it the second time around because now I do know what to expect. (Apparently Joss Whedon contributed to the screenplay, and I can definitely see some of his style coming through, as well.)

I also really, really liked the main character played by Sharon Stone, whom we later learn is named Ellen. In this blog series, I’ve already talked about the fact that a number of classic Westerns don’t really do right by their female characters. That’s why I was so excited to see Mattie Ross in both versions of “True Grit,” and why the female gunslinger in “The Quick and the Dead” meant so much to me.

Ellen is a total badass, defying the norms of the time and proving that she’s just as worthy to be in this quick-draw contest as the men who mock her at first. However, I really appreciated that the film allowed Ellen to be a nuanced character as well. She’s tough but also shows emotion; she still grieves the loss of her father years ago, and that’s why she’s out for revenge now.

(Spoilers ahead, in case you haven’t seen the film yet!)

I enjoyed Ellen’s friendship with Russell Crowe’s preacher; I honestly thought they were going to tease a romance between these characters, but I’m kinda glad they didn’t actually go there. We don’t see enough male/female friendships on film.

“The Quick and the Dead” continues the theme of justice vs. revenge, which has been showing up in a lot of the Westerns I’ve been watching in this blog series so far. John Herod is most definitely a terrible man, who’s a threat to the future of this town. But does that mean Ellen and Cort made a morally correct choice when they took justice into their own hands and killed Herod themselves?

Was there a more peaceful solution they could have pursued, or was justice back then really as wild and lawless as the West itself? It’s interesting that Cort really doesn’t want to pick up a gun, but circumstances eventually force him to.

I don’t think it’s a coincidence that the name of the town in this film is “Redemption.” It’s a bit on the nose, but it symbolizes what Ellen and Cort find at the end of the movie. Ellen blames herself for the death of her father, but now that Herod is gone, she can hopefully find some peace. And while Cort will always be haunted by his outlaw past, he doesn’t have to let it define him. It is possible to change and become a better person.

As mentioned before, I’d really like to watch “The Quick and the Dead” again, because I think a few of the things that kinda took me out of the movie on first viewing won’t bother me anymore, now that I know what to expect. It’s a fun adventure film that still has some deeper themes to dig into.