Better Late than Never blog series: The Dude abides in ‘The Big Lebowski’ 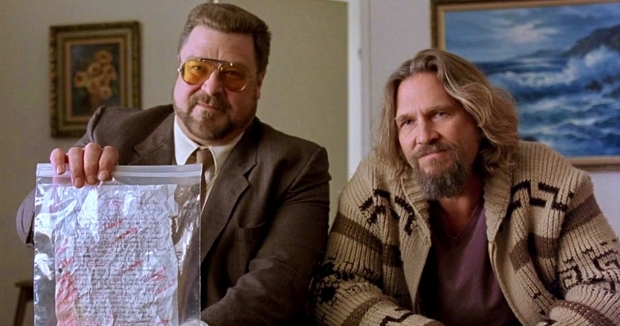 All Jeffrey Lebowski really wants is to get his rug back.

The easygoing slacker (better known as “the Dude”) is just minding his own business one night, when two crooks show up at his Los Angeles home and demand the money his wife owes their boss. The catch: the Dude isn’t married, and the crooks eventually figure out that they’ve got the wrong “Jeffrey Lebowski.” That doesn’t stop them from, well, ruining his rug and spoiling his night, and this incident leads to a somewhat bizarre, rather madcap adventure that involves our hero (in no particular order) bowling, serving as a courier for ransom money, and getting into a fight with a group of German nihilists.

Now regarded as a cult classic, “The Big Lebowski” was actually a box office flop when it was released in 1998 and received mixed reviews. Audiences and critics both seemed to warm up to it, though, and according to Wikipedia, in 2014 the movie was selected for preservation in the National Film Registry by the Library of Congress as a “culturally, historically, or aesthetically significant” film. I wonder what the Dude would make of that?

I had never seen “The Big Lebowski” before starting this blog series, and I realized I’d actually never seen a Coen brothers film, either. The writing/producing/directing duo have a fairly distinguished Hollywood resume, including films like “Fargo” and “O Brother, Where Art Thou?” Both those films should probably be added to my movie bucket list, actually. 😉

I watched “The Big Lebowski” a couple weeks ago, and I’m actually still not sure how I feel about it. I know that seems like a bit of a cop-out, because in a review you’re supposed to say whether you liked or disliked a film and why. 😉 It’s interesting because with the other three “Better Late than Never” blog series films — “Jaws,” “North by Northwest,” and “The Good, the Bad, and the Ugly” — I knew within the first 20 minutes what kind of films they were going to be, and I knew I was going to love them.

I don’t think that I’ve ever watched a movie quite like “The Big Lebowski,” and that’s really part of the movie’s charm. I’ve seen quirky comedies before (Edgar Wright’s Cornetto trilogy is one of my favorites); however, “The Big Lebowski” has a style all its own. Maybe that’s why I wasn’t sure what to think of it at first — I didn’t really have anything to compare it to.

Here’s what I liked: Jeff Bridges is obviously having a blast playing the Dude, and it’s hard not to love the character. He’s pretty lazy but is good-natured and well-meaning, and I loved his friendship with John Goodman’s much more intense Walter Sobchak. I’d watch more movies featuring the misadventures of these two, even if it was just them sitting in a bowling alley and having conversations.

I also enjoyed the complicated plot; the Coen brothers do a great job drawing comedy out of the Dude’s somewhat bumbling efforts to stay ahead of everything going on (he’s often pretty much clueless). The soundtrack is great, and there’s some great cinematography. I particularly enjoyed the creative ways the bowling scenes were shot.

I did feel that Steve Buscemi was a little under-used in this movie, but maybe that’s just because I love Steve Buscemi and wanted to see more from his character. I also thought Julianne Moore’s character, Maude Lebowski, was interesting, and I would have liked to see her more involved in the plot, as well.

In short, I feel like “The Big Lebowski” is a film I need to see again to fully develop my thoughts on it. It was a weirder movie than I was expecting; that’s not a bad thing, but it did take me a bit to adjust to the narrative style. I think I might enjoy it more the next time I watch it.

And regardless of whether it ends up being in line with my personal tastes or not, it is a very creative film, and I can see why it’s become a cult classic with a devoted fanbase.

With the “Better Late than Never” blog series, it has been really fun getting out of my “cinematic comfort zone” and watching some movies that don’t necessarily have a superhero or a spaceship in them. 😉 There’s definitely value in watching something with a fresh perspective. I do also want to watch more Coen brothers films, to see how “The Big Lebowski” compares to their other work.