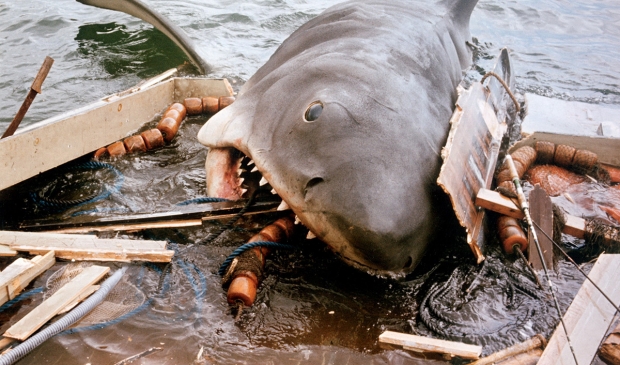 Although I’m a big fan of Steven Spielberg, I had actually never seen “Jaws” before. It’s one of those movies I just never got around to watching, and — admittedly — I was also probably a bit squeamish. But after successfully surviving some other scary movies this year like “A Quiet Place” and “Get Out” (and really enjoying them!), I decided it was time to give “Jaws” a try.

Even though I hadn’t seen the movie, I was already fairly familiar with the plot of “Jaws”: the seemingly quaint and quiet summer resort town of Amity Island, New England, is plunged into chaos after a series of violent shark attacks. Police chief Martin Brody (Roy Scheider) becomes increasingly frustrated, due to the fact that no one seems to take his warnings seriously until there have been multiple fatalities. He convinces the mayor to hire shark hunter Quint (Robert Shaw), and together with oceanographer Matt Hooper (Richard Dreyfuss), the three men set out on a quest to kill the shark before it harms another swimmer.

“Jaws” originally came out in the summer of 1975 and is looked on as a definitive summer blockbuster (and has been making people think twice about stepping into the ocean ever since). Yet how does the film hold up for first-time viewers 40 years after its original release?

While films are always going to be a product of their time to a certain extent, the movies that become classics do so because they also manage to transcend their era and provide just as much enjoyment to modern viewers. I think “Jaws” still works well because it’s a simple, timeless concept executed with top-notch practical effects. While “The Meg” will probably look a little dated in 10 years based on its CGI, “Jaws” will still feel real.

Spielberg starts off the film with a gruesome shark attack, putting the viewer on edge right from the beginning — and keeping them there throughout the film. You never forget that first scene, and every time a character goes into the water afterwards, you’re terrified the shark is going to return.

I think Spielberg was also smart to keep the suspense building and wait to fully reveal the shark until later in the film. In horror films, I feel that what you don’t see is always scarier than what you do see. When Spielberg finally does allow the shark to pop up out of the water, it’s terrifying. (Yes, I actually did scream out loud a few times!) There were a few moments where I noticed the shark was a puppet, but overall it was very realistic. I don’t know that I could have been in the water filming those scenes, because the shark looks too real and probably would have made me jump every time I saw it. 😉

It’s interesting that this film came out before the PG-13 rating was established (partially thanks to another Spielberg film, “Indiana Jones and the Temple of Doom”). Now I think of PG-rated movies as fairly safe, family films, but “Jaws” is rather traumatizing and gory at certain moments. In fact, it’s way bloodier than the Marvel and Star Wars PG-13 films today. Anyway, it’s interesting to see how film ratings and our perception of them have changed over time.

I thought the characters were cool, although I didn’t connect with them on an emotional level like I did with the characters from some of Spielberg’s other films, like the Indiana Jones series, “E.T.,” or “Jurassic Park.” In fact, that’s probably why “Jaws” won’t top my list of favorite Spielberg films, even though I did enjoy watching it. Just as a matter of personal taste, I prefer those three previously mentioned films because I feel like that’s where Spielberg best displays his trademark sense of wonder, fun, and adventure.

Still, like I said before, I did enjoy watching “Jaws,” and it’s definitely a must-see Spielberg film. It’s a great beginning to Spielberg’s legendary career.