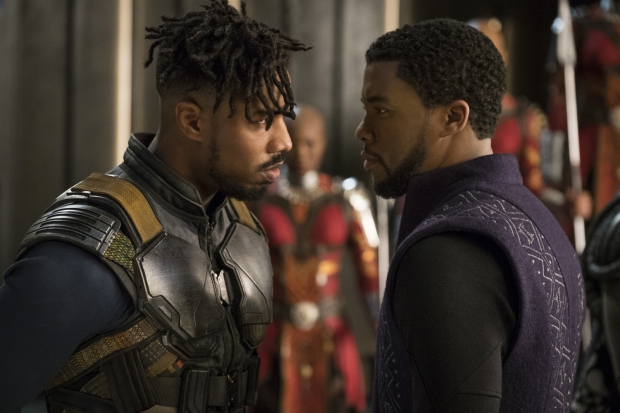 I don’t always do a post-Oscar nomination rundown for my blog, but this year there were enough surprises that I couldn’t resist jotting down my thoughts!

Of course, the biggest headline (at least in terms of geek news) is that “Black Panther” has made history as the first superhero film to be nominated for best picture. This is a huge deal, not just for Marvel Cinematic Studios, but for geek films in general.

I actually don’t mind that the Oscars don’t always recognize blockbusters. Those films get a lot of media attention (and cash at the box office), and the Academy Awards can be a chance to nominate some smaller-scale films that might otherwise be looked over by general audiences. But I also feel that sometimes, truly great geek films have been glossed over simply due to the fact that they were sci-fi, superhero, or fantasy based. (Case in point: Mark Hamill should have received an acting nod for his work in “The Last Jedi.” This is a hill that I will gladly fight and die on.)

“Black Panther” was a groundbreaking film in many ways, and it’s exciting to see the MCU’s work recognized on a prestigious platform like this one. I also hope this opens the door for other genre films to be recognized in the future. (As a side note, “Black Panther” is also the only “best picture” nom that I’ve seen so far; I need to get on that!)

Also of importance is the fact that a Netflix film received a nomination for best picture: “Roma” is the story of director Alfonso Cuarón’s experiences growing up in Mexico. We’ve watched streaming services become more and more of a powerhouse in the world of entertainment, and I’m glad that they’re being taken seriously. Understandably, this might make some of the bigger, more traditional studios a little nervous, but I believe that the more avenues for creative storytelling, the better. Netflix has produced some top-level material, and I can’t wait to see what else they’ll come up with.

Although the work he is being honored for is not a genre film, I’m also very excited to see Adam Driver get a nom for best supporting actor for his work in “BlackKKlansman” (a movie I still need to see). His portrayal of Kylo Ren is, hands down, my favorite part of Disney’s Star Wars sequel trilogy, and he’s given us one of the most fascinating and nuanced characters in the saga. Driver definitely has a bright future ahead of him, and I’m grateful the Star Wars saga was able to nab him for a role.

I’m very happy that “Spider-Man: Into the Spider-Verse” received a nomination for best animated feature film, and I really hope it wins. It’s still my favorite movie from 2018. Everything about it is perfect, from the colorful and creative animation to a coming-of-age origin story that managed to feel fresh and exciting, despite the many times we’ve already seen Spidey’s story onscreen.

One of my disappointments about the list of nominations is that I wish there was more recognition for the film “First Man.” This was a wonderful, gorgeously shot movie about Apollo astronaut Neil Armstrong, and for whatever reason, it just didn’t seem to get as much attention as it deserved.

Another omission is the score for “Solo: A Star Wars Story.” John Powell did a great job adapting the musical themes of the Star Wars franchise while still giving the score his own flair. I love listening to that soundtrack while I write, and I wish it had been recognized.

“Best visual effects” is the category where my personal favorite flicks of the year tend to get recognized, and it’s always interesting to see what shows up here (and what doesn’t).

“Avengers: Infinity War,” “Christopher Robin, “First Man,” “Ready Player One,” and “Solo: A Star Wars Story” were all films that I enjoyed, so I can’t complain too much. Still, it would have been nice to see “Annihilation” show up as well.

So, what are your thoughts? What nominations are you most excited about? What snubs are the most frustrating? What’s YOUR personal best picture of the year?