Posted 6 years ago by Bobby Nash 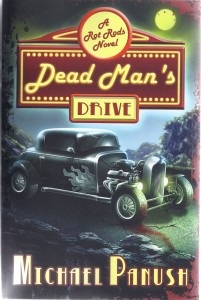 Ron Fortier returns with another Pulp Fiction Review. This time out Ron takes a look at Dead Man’s Drive (A Rot Rods Novel) by Michael Panush from Curiosity Quills.

I am never disappointed when Michael Panush invents a new mash-up genre and this is perhaps his wildest yet. What Panush does is take the 1950s world of hot-rods, Bobby-soxers and rock and roll and mixes in a heavy does of classic horror fare to produce DEAD MAN’S DRIVE. Imagine the film AMERICAN GRAFFITI as done by Hammer Studios and you get the idea.

It all takes place in a charming little California coastal town called La Cruz which, for whatever mystical logic, has become the epicenter weird doings. Of course no typical law enforcement force is equipped to handle threats of the bizarro kind and so we have Donovan Motors. This is a humming garage complex that sits smack dab in the middle of La Cruz and is owned and managed by a World War II vet referred to simply as the Captain.

Among the Captain’s drivers are Wooster Stokes, a one time Okie bank robber, Zoot Suiter and part-time shaman, Angel Rey and a beautiful sorceress-in-training Betty Bright. But the real ace in the Captain’s deck is a green-skinned zombie named Roscoe who is the book’s main protagonist. Roscoe suffers from amnesia and has no recollection of who he was before he died. His life, as far as he can remember, only began after being run over by Angel Rey and the Captain and then somehow, magically, reviving at their headquarters in Donovan Motors. From that point on, Roscoe is the Captain’s chief aid and top driver.

There’s a lot more to all these fascinating characters but I’m not about to give away and more and spoil the reader’s fun as each revelation arrives and quickens the pace of the novel. The general crux of the book centers around a wealthy businessman named Reed Strictland who, for whatever twisted purposes, has suddenly appeared with an army of zombies and L.A. Mafia hoods to take over La Cruz. In battling to stave off Strictland, Roscoe and his friends put everything they hold dear at risk to save the people of La Cruz.

Along the way, pieces of Roscoe’s lost past begin to surface and they paint an ugly portrait of his true identity. Even if he and his fellow drivers can defeat the horror falling upon La Cruz, will Roscoe uncovering the truth about himself? Is it a price he can afford to pay? DEAD MAN’S DRIVE will have readers on the edge of their seats, pedal-to-the-metal all the way to the finish line. Buckle up, pulp fans. It’s a wild ride.