Home The Goldfinch Paints a Haunting Image of Grief

The Goldfinch Paints a Haunting Image of Grief

Posted 9 months ago by Rebecca Daniel 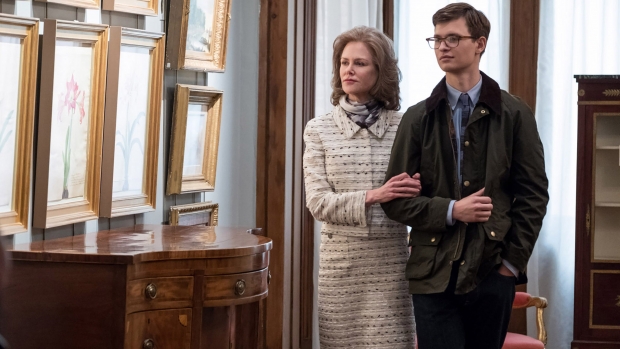 How can someone navigate their way through grief after a life altering trauma upends everything they’ve ever known? Based on the novel by Donna Tart, The Goldfinch looks to explore this topic through the life of Theodore Decker.
Theo is 13-years-old when he visits an art museum with his mother on a seemingly average day. Tragedy strikes when the museum is bombed by a terrorist. His mother is tragically killed and Theo survives. He escapes the bombing and takes a famous painting, The Goldfinch. Theo spends the next several years making his way through life caged in by the trauma, wandering aimlessly in hopes that one day he’ll be free from the grief of his traumatic loss.

Adapting The Goldfinch to the big screen was never going to be easy. It’s 800 pages of intricately detailed character drama, driven by different stages of Theo’s life. As a huge fan of the book, I’ve been very excited to see this film. However, I was also apprehensive when the first wave of critical reviews hit and completely trashed the film. The critics are being ridiculous with their negativity towards The Goldfinch. If you’re a fan of the book, don’t worry. You will be pleased to see the novel come to life on the big screen. Just seeing Theo’s story brought to the screen is meaningful.

Director John Crowley takes a different approach with the structure of the film. Instead of telling the story chronologically, like in the novel, the events unfold through flashbacks. In some scenes, this works quite well on an artistic level. Yet in others, the nonlinear narrative structure hinders the emotional impact of Theo’s story. The film begins with Theo as an adult, then flashes back to the tragic event that shapes his story. Then it moves between his past and present frequently, picking certain plot lines from the book that will serve the film best. This creates a jumble of timelines that could easily confuse anyone who hasn’t read the book. In the novel, every moment of Theo’s life builds upon the next after the events of the bombing. It’s all connected. Yet, the film is structured in fragmented pieces, so his issues seem unrelated. Unfortunately, by telling the story in this manner, the big picture of Theo’s story could get lost in translation

In terms of acting, there are several stars bringing the novel characters to life including Nicole Kidman as the kind hearted Mrs. Barbour who takes Theo in after the tragedy, Jeffrey Wright as the wise antique dealer Hobie, and Luke Wilson as Theo’s unpredictable father.
Despite the stars mentioned above, it’s Oakes Fegley who is the standout of the film as young Theo.  He portrays a raw sense of loss and heartbreak after his mother’s shocking death, constantly grappling with the circumstances of that day. Theo wonders if he could’ve done something to change the circumstances surrounding her death. He holds on to The Goldfinch painting tightly as it symbolizes the memory of his mother. Fegley is able to showcase a wide range of emotions in a short amount of time that is very realistic to someone who is grieving.

Helping young Theo move through his grief is the European vagabond, Boris, played by Finn Wolfhard in quite a memorable performance. He brings a sense of comic relief to a point of the film that needs it. However, Boris is a mystery and his reckless antics aren’t always for the best.

Ansel Elgort brings adult Theo to life in a tragic way. He struggles with PTSD, drug addiction, and some shady antique dealings that may not be legal. He reflects on the events of his life with a sense of sorrow, unsure if he will ever move on from the ghosts of his past. The only thing keeping him afloat is the hope that his childhood love, Pippa (Ashleigh Cummings) may feel the same about him. Elgort is genuinely moving here, making the audience feel sympathy for a character who has weaved a tangled web of mistakes.

Theo’s life may be quite messy, but at least it looks incredibly polished. The cinematography is one of the best aspects of The Goldfinch. For a film about a painting, it’s nice that every shot looks like art. Roger Deakins is truly a master in cinematography. Every shot is wonderfully lit, with emphasis on warm tones. There’s a sense of emotion to each and every moment thanks to the images on screen. Whether the characters are in the middle of the Las Vegas desert or stuck in the rubble of an explosion, Deakins is sure to make each shot flow with vision, emotion, and creativity.
The musical choices also add a lot to the film. Trevor Gureckis score is hauntingly beautiful. It’s one of the best scores that I’ve heard this year. The track “Beautiful Things” fits the story perfectly. Other song additions by Radiohead, New Order, and Them fit into the film at just the right moments.

While the non-linear plot structure keeps The Goldfinch from being as strong as its novel counterpart, there is still plenty to admire in this adaption. The cinematography, acting, and music bring the story to life in quite an impressive way. The Goldfinch is a compelling coming-of-age tale that paints a haunting image of grief.

Share this...
Posted in Reviews · Tagged: Film, review, the goldfinch