Home PULP FICTION REVIEWS GETS CAUGHT IN THE CROSSFIRE!

PULP FICTION REVIEWS GETS CAUGHT IN THE CROSSFIRE!

Posted 6 years ago by Bobby Nash 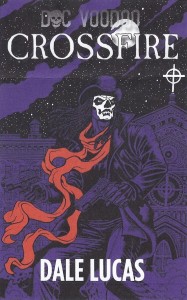 Ron Fortier returns with another Pulp Fiction Review. This time out Ron takes a look at Doc Voodoo: Crossfire by Dale Lucas from Beating Windward Press.

A few years ago we were introduced to the black pulp avenger, Doc Voodoo in his debut novel. It was an auspicious one and in our enthusiastic review we made it quite clear we wanted sequels. Now that wish has been answered in a marvelous fashion by author Dale Lucas affording we readers with another fast paced, wall-to-wall action thriller that is truly great reading experience.

In 1927 Harlem, the Italian mob boss, Harry Flood, has plans on taking over the neighborhood. To do so he sends his goons to murder the leading community leaders which include the highly respected Reverend Barnabus Farnes amongst others. At the last possible moment, the skull-faced, gun-toting Doc Voodoo comes to the rescue. Farnes is totally unaware that the voodoo empowered avenger is actually Dr. Dub Corveaux, the kind-hearted, dedicated man of medicine who is sweet on his daughter, the lovely Fralene.

Incensed by his men’s failure to eliminate their targets, Flood cunningly plans to fight fire with fire, taking his lead from the mysterious black clad crime fighter. He finds a Haitian witch and has her summon a demon to possess Rev. Farnes. At the same time, a self-serving, black entrepreneur, Jebediah Debbs, tired of the pastor’s non-violent approach, begins to arm Harlem natives so as to form their own vigilante committee and deal with the mobsters’ threat bullet for bullet.

Now all of Harlem is on the verge of a massive blood-letting and its one shining hope for peace has become corrupted by unknown forces. Suddenly both the skills of Dr. Corveaux and the abilities of his scary alter-ego will be called upon if catastrophe is to be avoided. But can one man stand alone against the tides of both human and supernatural greed and cruelty.

Mixing classic pulp elements of both hero and horror genres, Lucas once again puts forth an amazing, totally gratifying tale that is as good, if not better, than the first book in this series. “Doc Voodoo : Crossfire,” is easily one of the best pulp novels we’ve read this year and we will be nominating for several pulp awards come Jan. 15, 2015. That good? You can bet your bones on it.