Posted 8 months ago by Rebecca Daniel 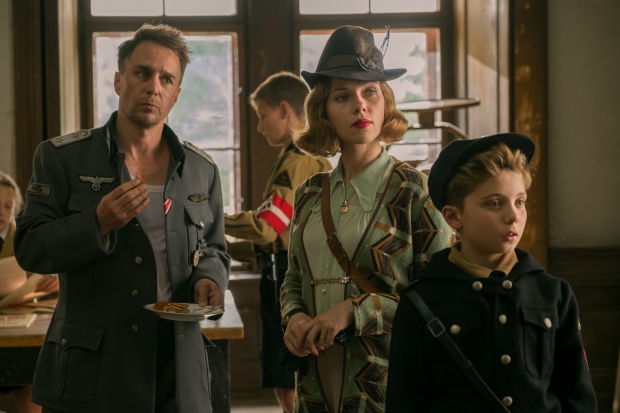 “Let everything happen to you. Beauty and terror. No feeling is final.”
Jojo Rabbit ends on this quote by Austrian poet Rainer Maria Rilke. The entire film is an embodiment of these words as the main characters experience the conflicting emotions of joy and agony, hope and suffering, confidence, and terror, all under the control of Germany’s Third Reich.

The film follows Johannes “Jojo” Betzler, a 10-year-old boy dedicated to Hitler’s Nazi regime. Jojo’s blind nationalism has led him to be so obsessed with the Third Reich that he envisions Hitler as an imaginary friend who guides him through his everyday life. The film gets its title from an incident where Jojo is unable to kill a rabbit in the Hitler Youth Camp. He becomes a target for bullying and receives the nickname “Jojo Rabbit.” Imaginary Hitler tells him that rabbits can “outwit all of their enemies,” leading Jojo to try to impress the camp by running out into the middle of a field with a grenade. Disaster ensues, of course, leaving Jojo injured with a facial scar. The accident crushes Jojo’s dream of ever fighting for Germany. Shortly after his accident, Jojo discovers his mother, Rosie (Scarlett Johansson), is hiding a Jewish girl named Elsa (Thomasin McKenzie) in their home. This revelation threatens to turn Jojo’s entire belief system upside down.

There’s no doubt that Jojo Rabbit will be a polarizing film among audiences. This is satire, much like Inglourious Basterds or The Producers. The biting satire frames Nazis as bumbling idiots. Hitler is portrayed as an outlandish and moronic imaginary friend to the 10-year-old Jojo. Director Taika Waititi spoofs the tyrannical Hitler hilariously in the film. He’s both foolish and diabolical, attempting to get Jojo involved in terrible deeds. I don’t want to talk too much about his performance because it’s best to just see it for yourself. However, it’s important to note that Waititi is part Jewish himself and felt a Jewish man portraying the despicable Nazi dictator would be a slap in the face to Hitler.

Some critics have said the film doesn’t take its World War II subject matter seriously enough. However, it’s important to note that the entirety of Jojo Rabbit is viewed through the lens of a young child brainwashed by Nazi propaganda. Jojo is coming to terms with the fact that everything he’s been fed by his country is a lie. I honestly don’t see anything about the film that celebrates or condones Nazis. Whether the focus is on the regime’s insane youth training methods, book burning, or lack of basic human understanding, this film mocks the Nazis ferociously.

Taika Waititi directs Jojo Rabbit brilliantly with just the right balance of drama, humor, and heart. This is a coming-of-age film set in one of the darkest periods in history, yet Waititi still gives it so much humanity. If you’ve seen his previous films (Hunt For The Wilderpeople, Thor: Ragnarok), you know he has a very creative directorial style filled with offbeat humor, standout characters, and stylistic visual flair. (The cinematography by Mihai Mālaimare Jr. is fantastic.) All of these elements are present in Jojo Rabbit to make up a dynamic cinematic experience that you won’t forget.
Waititi also adapted the screenplay to Jojo Rabbit (based on the book Caging Skies by Christine Leunens), which is endlessly entertaining. The film frequently shifts from dark comedy to affecting drama at a moment’s notice. Yet, these transitions are seamless. Little themes throughout the script about dancing and a character’s shoes end up packing an emotional punch when you least expect it. I went from laughing to tears multiple times, and I say that as someone who never cries at the movies. This is an emotional roller coaster.

Another thing that turns Jojo Rabbit into an emotional roller coaster is the phenomenal acting! Every single actor gives their all.
Roman Griffin Davis has NEVER been in a movie before this, yet he’s fantastic as Jojo! He is convincing as a child nationalist clinging to the country’s Nazi regime. Instead of taking the time to be a kid, Jojo spends days volunteering for the Third Reich, hoping he can help Hitler win the war. He wants to be accepted and belong to something bigger than himself. But with each passing scene, the blinders fall as Jojo sees the horrors his country has committed. Davis portrays a wide range of emotions, including rage, joy, and unrelenting despair. He’s hilarious one moment and the next, utterly heartbreaking. I’ve seen very few child performances as moving as this one. He should be getting some awards season attention.

Scarlett Johansson is going to get nominated for the Best Supporting Actress Oscar. I’m marking it down now! If she doesn’t, I will be shocked. Her acting as Jojo’s mother, Rosie, is some of her best work to date. Rosie is the one constant in Jojo’s life. She attempts to show him that “love is the strongest thing in the world,” and her character lives by that quote. She raises Jojo fearlessly on her own and does everything she can to be a good mother. There’s a scene in the film where Rosie tries to act as both parents to Jojo. It is such a profoundly affecting moment. Not to mention, Rosie takes in Elsa because she wants to help others, even when her country turns a blind eye to the atrocities of war.

Thomasin McKenzie is great as Elsa, the Jewish teenage girl hiding out in Jojo’s house. Elsa is whip-smart and knows how to handle almost any situation thrown her way. I appreciate that even though Jojo Rabbit focuses on a young boy as the lead, it has a unique focus on two well-written female characters and how the war impacts them. Elsa’s relationship with Jojo is fascinating to watch, considering the two begin as enemies. As Elsa interacts with Jojo, she challenges his entire way of thinking to prove his fanatic Nazi beliefs are not only false but deeply dangerous. The more Jojo is around Elsa, the more he can see she is not the enemy. The title of the film works on a surface level to serve the plot of the story, but there’s a deeper symbolism at play with the rabbit that weaves through Elsa and Jojo’s storyline. McKenzie and Davis have wonderful chemistry in every scene they share.

Other celebrity standouts include Sam Rockwell as Captain Klenzendorf, Rebel Wilson as Fräulein Raum, and Archie Yates as Jojo’s best friend, Yorkie. Archie has never been in a movie before, but he’s hysterical! Seriously, what’s going on in this movie?! These talented children who have never been in anything before have some of the best acting skills I’ve seen all year! Archie steals every single one of his scenes. Way to go, Archie!

Nazi Germany is never an easy subject matter to tackle in filmmaking, especially when balancing different tones. Yet, Jojo Rabbit is a brilliant coming-of age-film that finds a way to balance satire, drama, and comedy. Taika Waititi directs a phenomenal cast in one of the year’s best films.
My Rating: 10/10